As requested. From Mr. Briggs:
Here's another (nearly) new one from me. It's a tricked out super mod of the old Electro Harmonix LPB-1 circuit that produces some lovely singing overdrive tones reminiscent of an old VOX from their 1960's heyday. I took the Lovepedal Englishman (A supposed Vox AC30 / AC15 emulator) as a base and went from there - Firstly I wanted a little more gain, hence the 4k7 collector resistor. Along with more gain I wanted more emphasis and clipping on the higher mids to replicate that treble laden Vox overdrive hence the 82nF bypass cap and the 47k/22nF mids filter at the end of the circuit. These changes make the circuit sound livelier and give it more character. The use of the *super* low forward voltage SB340 diode in combo with the BAT46 diode produces harmonically rick asymmetrical clipping, the levels of which can be controlled using the "Headroom" control. The headroom control also allows a nice rich low end to be retained while allowing the top end to be clipped, as you roll back the clipping a nice tube like "note attack sag" effect becomes prominent - it's quite pleasing and cool to play with. The use of the 2N3565 transistor is due to some tests carried out a while ago where it was found that the 2N3565 sounded best in these sort of applications, you can replace it with a 2N5088 or BC108 or, in fact, any decent gain NPN transistor. 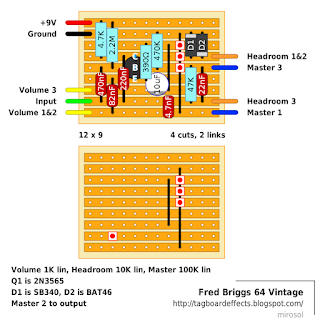