Many thanks to Equinox for supplying his traced PCB layout for us to create the schematic and layout from.  This is based on the current version which I think was first released in 2011.


Zeke Clark, Edward Van Halen's longtime renowned guitar tech played through a pinnacle and this is what he had to say:

“I've played tons of pedals that promised that “Brown Sound”... this pedal NAILS it better than anything I've ever heard or played.” - Zeke Clark, former tech for Eddie Van Halen

Sometimes you need extreme gain, sometimes you need mild overdrive...this pedal does that with an awesome “Brown Sound”! It has an extremely tweakable EQ - from scooped mids to tons of warm mids, all with the turn of 2 knobs.

This pedal has 4 knobs -- two separate tone controls that act as a sort of parametric EQ, gain and volume. It also has a 'bright' switch that adds a ton of variety and is very handy when playing a dark sounding amp, as well as another toggle switch that will give you high gain “Brown Sound” tones. 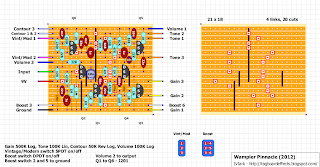