Deadastronaut's version of the Big Muff.
Original DIY thread and schematic are available here.
There's also another great layout by Mug in the Forum section.

To my ears, this is an overlooked gem.

Update! Built it myself and yes it sounds as great as i remembered. However. I do recommend going stright for C10K pot on the drive control. And it doesn't hurt to up the "12K*" to 22K. This way the output level goes up to "modern sufficient".
Posted by mirosol at 21:44 20 comments

Here is something a bit different and maybe useful!
It's an "effects loop buffer".
There isn't a schematic for it but you can find the original layout on Ceriatone's forum here.
You can also find all infos on their original manual here.
12/03/17 Layout updated! Moved 220K resistor and link from S to G on the top J201.

I know there have been veros around for a while but I wanted to add this project to the main page.
It's basically a Rams Head Muff with an added Baxandall tone control.
You can find original FSB thread and schematic here.
It should easily fit it in 1590B size box.

Crank both treble and bass and you get a classic scooped midrange. Back both off, while turning up the volume knob and your midrange content increases. Park the treble and roll back the bass and the midrange scoop frequency shifts downward so you have complete control over which frequencies you are cutting. Roll the bass below noon and you start to add a bump to your midrange, which is great for running into a hot amp. This tone control style is capable of numerous sounds, making the Manx Loaghtan one of the most versatile pedals of this style.” - See more at: http://tonereport.com/blogs/lifestyle/big-muff-shootout/page/three#sthash.Pt8yzCYp.dpuf
Baxandall tone control
Rams Head Muff
Rams Head Muff
Rams Head Muff

Wren and Cuff Phat Phuk B

Here’s what the Phat Phuk is:
A germanium/JFET booster. A unique sounding pedal which adds a beautiful sheen to your bass’ top end and a bit of grit to the overall tone. It’s a fantastic pedal for situations where you want a lift in your overall level, during a chorus or bridge for example, with a bit of bawdy bump via the germanium transistor.

One nice feature is also the more modern JFET transistor at the input which keeps the pedal impedance-friendly when it comes to active bass pickups. This helps the Phat Phuk to remain consistent whether you put a P-Bass in front of it, or a Warwick Thumb.
Another recommended use: As a simple preamp when going direct into your DAW. Helps to de-sterilize your bass’s direct tone and add a little life before the signal is converted to ones and zeros.

Something else that was considered when creating the Phat Phuk B. Many clean-boosts offer way too much boost in my opinion. In any normal playing situation, including intentionally slamming the front end of a tube amp to induce the amp’s natural overdrive, one really only needs a hefty thump to get the job done. There’s nothing wrong with having a large amount of volume on tap, but a problem that can sometimes occur is a lack of ability to fine tune the amount of boost you want. When the sweep of the knob goes from zero to melt-down with one turn of the knob, it gets tough to really dial in a precise amount of boost. Also a slight bump of the boost knob (with a foot or nervous “live show” jitters) can send things out of control. I know because its happened to me. Went for the big chorus during a song, hit the clean boost (not mine, this was long before Wren and Cuff existed) and tore the heads off the people in the front, pissed off the sound man, and pretty much ruined that song. Therefore, the volume sweep was reduced with the Phatty. You still get a big gob of gain, and probably won’t ever need to run the pedal “at 11″, but the trade -off is worth the extra control. Just an example of what Wren and Cuff prides itself on: pedals that sound superior, look beautiful, can take a beating, and are made with the “real world” player in mind.
In other words: A meticulous attention to detail.

1 - I posted the trace, board pictures, and schematic in the request section, here so everyone can take a look and check the trace.

2 - the Germanium Transistor in Q2 is a Chinese Transistor with the markings removed, but what can be made out is AX9. This is PNP, but the hfe is unknown, but the good news is the schematic has been verified by JohnK, big thanks, with a PNP Germanium with 91hfe. So for now, as I put in the layout notes use a PNP Germanium with at least 90hfe, but by all means test it with other values. Don't forget that if you're using Russians that many times transistors with lower hfe seem to act similar to others of higher hfe. 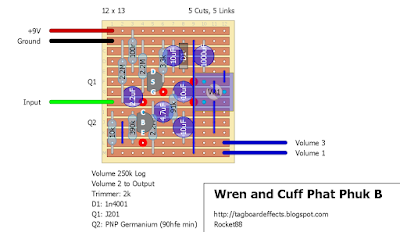 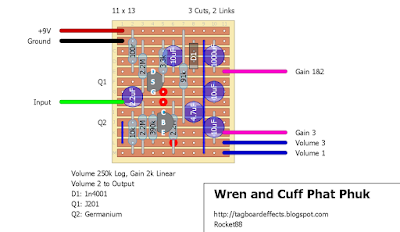 Tweaked the layout to make the bias trimmer an external pot. I chose a linear taper as it's common to use linear taper pots for bias adjusting and the trimmer should act linearly. JohnK used a 1k reverse log pot, but I think you won't get the full range you do with the trimmer by lowering the value.
Posted by Zach at 06:13 56 comments

"The Germania is Homebrew's take on the classic Rangemaster treble booster from the 1960s, and offers up to 20dB of gain to drive your amp.
In its 'hi-fi' setting, you get a full range boost, but a 'lo-fi' setting offers a more focused boost in one of three frequency ranges controlled with the 3Q switch. Boost in hi-fi mode is bright, with some germanium-driven grit to it, and as you turn the knob clockwise there's a massive amount available. In lo-fi mode, the three settings offer cut in the bottom but different midrange emphasis.
This pedal works best with an amp that's already overdriven, and especially one that's dark-sounding - kick it in to take it up another level and squeeze out some harmonics - it did a fine job with our old non top-boost AC30. It's also great with a dirt pedal.
The Germania can deliver a raw and aggressive boost, but that tonal shift won't necessarily suit all amp settings, so try it out with your own."
You can find the original FSB thread here.

Original info:
"I designed the SEX DRIVE pedal to fulfill the very particular needs of good friend Charlie Sexton.
The goal was to build a “clean-boost” pedal that would supply additional bottom end and sustain when needed. The pedal would have to provide a boost that would not alter the original quality of the amplifiers natural tone. Most important, was to not add a “nasal” tone like the other pedals in his effects graveyard.
The result was the SEX DRIVE pedal"
You can find the original FSB thread here.

Here are two layouts for a classic Ring Modulator.
The first one is for a vintage version (schematic available here).
The DIP version of 1496 had a different pinout.
The second one is for the modern vesion and it could potentially fit in a 125B size box (there is no schematic but a PCB layout here).
Not sure if they have been verified.
You should be able to use Mark's Bipolar Voltage Converter. 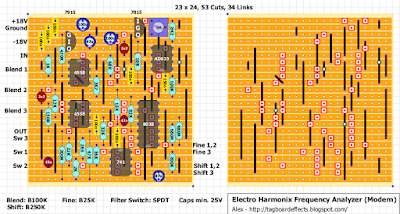