In keeping with our ThroBak Guitar effects pedals Signature Sound philosophy Strange Master treble booster offers user adjustments to shape the sound of this effect. Jimmy Page, Jimi Hendrix and Brian May had Roger Mayer and Peter Cornish customize their effects to create their own signature sound. We give this control to you.

As far as we can tell we are the only company offering a Dallas Range Master clone with a bias adjustment. This  allows you to change the character of treble boost from loose to tight. Switchable range allows treble boost and mid boost germanium distortion. Recreate the Clapton Beano tone or the singing overdrive of Brian May to the growl of Tony Iommi with this pedal, its all in there.

Basically, the Strange Master is a Rangemaster with a switch allowing you to selecting between 2 input caps (Treble and Full) and another switch to select between transistors (Germanium and Silicon), and a bias pot to adjust the bias either between the germanium and silicon transistors or give it a little grit.

Keep in mind that the gain of the transistors is going to be paramount in getting it to sound good. I would suggest looking for gains in the 100-120 hFE range for the germanium (just like a regular rangemaster), and something around 250 hFE for the silicon. Also you can play with the input and output caps to get more or less bass. You can also change the Hi/Low switch for a pot to give you a sweep between the 2 input caps. 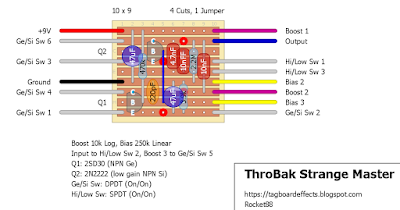 Brad of Creepy Fingers posted about his build of the old SRS EQ/Exciter pedal with a little mod to allow for gain control. The SRS EQ/Exciter is basically a Fuzz Face with a buffer and a mid control. All I can say is this thing sounds HUGE!!!!

First post of the new year. This comes from a request posted in the forum. Not much I could find about this other than it's a Fuzz Face derivative made in the 70's in the USSR. 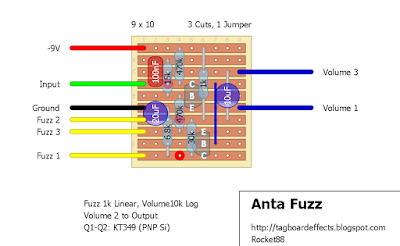