Here is a layout for a classic pedal.
I've drawn 2 versions: Vintage and Modern.
There are 2 layouts for the Vintage: with and without output boost.
I've added a boost to the Modern layout to avoid volume loss.
You can find the original FSB thread here.
16/01/2017 Layout updated! I've changed the vintage layouts because there were some errors in the schematic.
Thanks to Barcley for pointing out the corrections that I needed to make!

Here is a layout for the older version of EH Black Finger.
You can find the original FSB thread here.
I've used Pedalgrinder slightly modified schematic on page 3.
Some suggested high gain, some low gain transistors.
Should test them both. 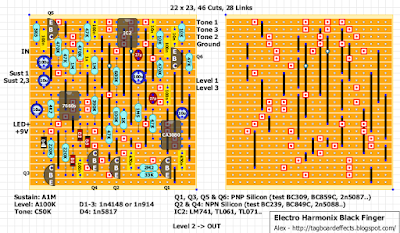 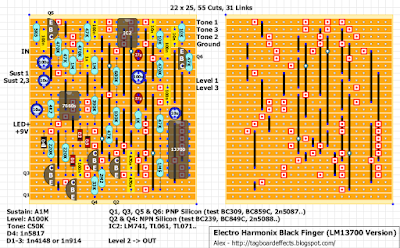 Here is a verified layout for a quite unknown slapback-echo EH pedal.
You can find the original FSB thread here.
I've added an output boost to cover volume loss.
I've found only one video around but didn't sound great. 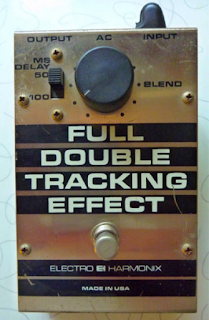 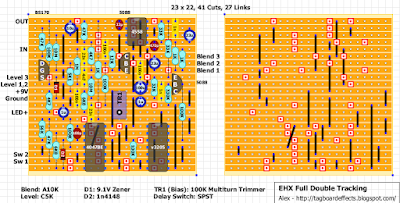 Here is a great fuzz pedal similar to the Rockett WTF (which Paul also designed).
A couple of capacitors are unknown.
You need to test different values (shouldn't be too difficult to find the correct ones).
Schematic and original FSB thread are available here.
Paul has also added a Si/Ge transistors switch to his V.2
I've added a second layout with the new extra switch but it's all guesswork. 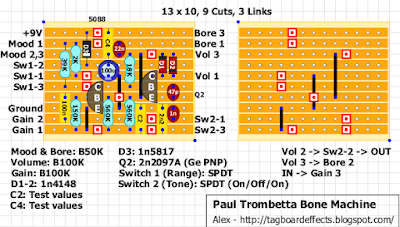 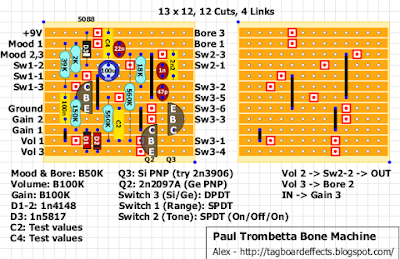 This is a verified layout of the Grey Version with an added Bass Boost switch borrowed from V.2
It's basically 2 modified well known circuits in series (TubeScreamer & Shredmaster).
There are 2 versions:
- a true bypass version were you wire two separate 3PDT footswitches in series.
- the original Visual Sound version which uses a Multiplexer Switching daughterboard.
The result should be a much smaller pedal compared to the original.
You can check Strassercaster verified version on the forum section.
Schematic and original thread from FSB are available here. 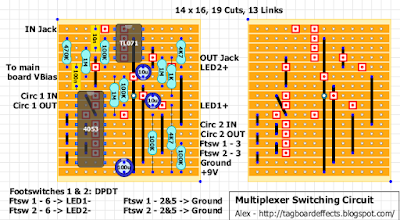 Here are some great new Tap-Tempo projects by Madbean.
I prefer to add them all in the same post because they are meant to work together.
You could use 1/8" jack & plugs.
You can find all info and his great (and cheap!) PCBs on his website here.
The TapLFO is available from SmallBear here. 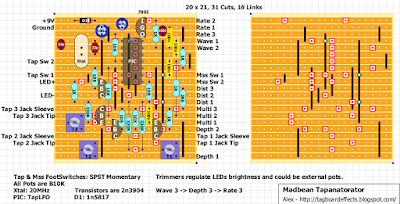 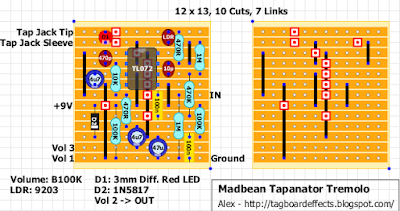 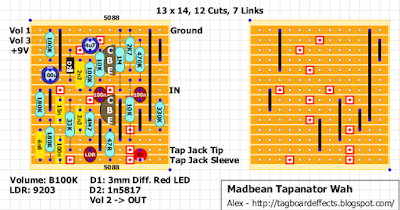 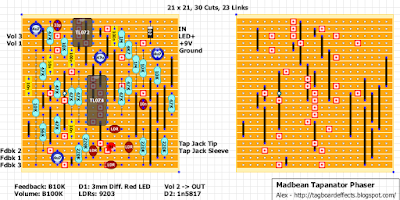 Here is the newer version of the Cave Dweller.
You can find Brian's original project here.
Original info:

While the original Cave Dweller was a simple and colorful sounding delay it had a few drawbacks;


it was pretty lo-fi, and darkened the dry guitar tone somewhat. This was due to the limitation of using only the PT2399 for both dry signal and delay signal processing. The objectives for the re-design were to improve the quality of delay and dry guitar signal without requiring as many parts as a full-fledged delay circuit such as the MBP ZP Micro. This is accomplished by introducing a new input stage for dry signal processing and also by adding additional filtering to the delay signal. The result remains fairly low in parts count without compromising on the delay tone.

This was a request.
You can find the original FSB thread here.

Here's a really nice delay designed by Nocentelli.
You can find the original thread on FSB here.

This is his description of the circuit:
Here's a variation on the deep blue delay; two PT2399 chips and a current mirror delay pot give around 2200ms delay, although beyond 700ms gets pretty lo-fi. There are two points where a momentary SPST can be used: Either to briefly connect the input to the delay input on select phrases (dub mode), or to bypass the repeats feedback resistor for self-oscillation on demand.

A dual overdrive based on the classic grey spec DOD 250.
The schematic didn't come from the original EQD pedal.
David has recreated the circuit on his website (Perf & PCB Effects Layouts).
You can find his original and verified layout here.

Up next in the tube preamp series, I give you the Orange AD200B MkIII. This is the current production AD200B, which has a few changes compared to the MkI, which is why I figured it would be a good idea to make a layout for this version as well. Similar to the MkI, the MkIII is known for great clean, with a focused midrange, but has great grit with the gain cranked.

Edit: Putting this on hold until i can get some time to breadboard it and get it sounding right.

Up next in the tube preamp series, I give you the Orange AD200B MkI. Made in very limited numbers, only a few hundred if that, in 2001 these were made P2P on turretboard. Known for great clean, with a focused midrange, but has great grit with the gain cranked. 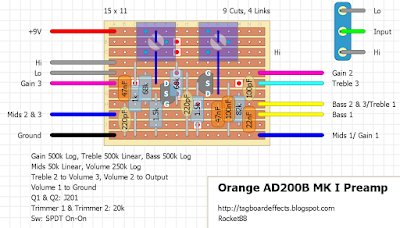 Edit: Putting this on hold until i can get some time to breadboard it and get it sounding right.
Posted by Zach at 01:01 28 comments

For those that don't know I'm a huge lover of low end, and a worshiper of all things Sunn, in fact I've designed a turretboard layout to build a 1st Gen Sunn Model T ready to go as soon as I have the time to build it, which since I'm getting my Doctorate won't be for 3yrs.

But, I digress. With all these new FET amp in a box pedals out now, I've yet to see any that are based on the amps I've lusted after. So, with the help of Ciaran, who did the majority of the grunt work, I bring you the first in what will be a series of amp preamps converted to FET pedals that he and I are going to be working on.

Unlike, the Earthquaker Acapulco Gold, which falsely claims to emulate the Model T, this monster is a true Model T preamp, minus the presence pot. You get both the Normal and Bright channels, as well as the ability to jumper both together just like the real deal.

The 1st gen Model T was based on the old Fender Bassman, but has much more low end, and nice tight focused grit. It's never truely clean. Now the real magic happens when you put the right booster in front of it, or a fuzz/distortion pedal like a rat or big muff.

Example of someone just messing around, low gains too. :)


Example of the amp with Distortion Pedals

For those curious what the peamp itself sounds like as opposed to the original amp, here's a really short video of this preamp in a home built 100watt solid state mini model t I built. The preamp is being run at 24V, and both channels simultaneously, so there's no switch between channels. The gain for both channels at noon, master volume at like 2 o'clock, then used a modded Ross distortion I make that's heavily modified for more low end, and an active Bandaxall tone stack. I ran it through my Ampeg SVT210AV (2x10 bass cab), and audio & video from my iPhone. I'm playing my Les Paul tuned to C-Standard with a Seymour Duncan Pearly Gates in the neck and JB in the bridge, but using the neck pickup only.Ignore the crappy playing I'm a bassist not a guitarist. 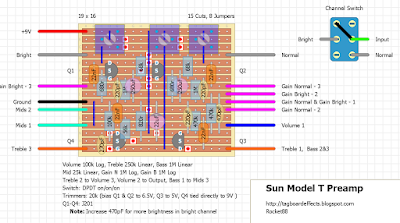 Layout 1 Gain Mod: For those that don't want the gain pots to be able to cut off the output completely I've tweaked the layout to match Ciaran's suggestion of adding a 100k resistor to ground from lug 1 of both gain pots. Stupid easy mod if you've already built the regular layout.

Layout 2: 2nd tonestack wiring, exactly as the amp. note that both wiring options will act the same as it's a modified fender/marshall/vox tonestack 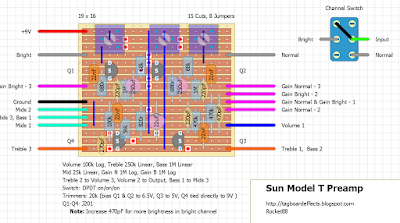 Layout 2 Gain Mod: For those that don't want the gain pots to be able to cut off the output completely I've tweaked the layout to match Ciaran's suggestion of adding a 100k resistor to ground from lug 1 of both gain pots. Stupid easy mod if you've already built the regular layout.