In October 2003, Dan Coggins (formerly of Lovetone) released his first commercial pedal under the Dinosaural brand, called the Tube Bender. His design goal was to make something that was sort of a tonal hybrid of the Tone Bender and Tube Screamer, hence the name. And honestly, having listened to it, I’m not sure there’s a better way to describe it. He only made around 140 of them between 2003 and 2007, but many of them were snatched up by musicians and producers in the UK. So while they’re exceedingly rare, you’ve most likely heard it.

I added a mod from the AION Wyvern Silicon Drive of  a second position to the Tone Shift switch that’s in-between the flat and scoop modes. I've included the hfe readings from an original pedal as per Aion's trace, so you can try different transistors with similar gains.

It's so rare I couldn't find a demo of it, but I think you get the gist of what it should sound like. 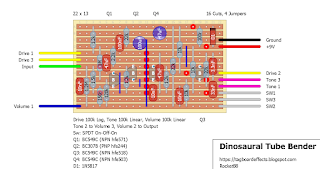 Long story short, YATS. It's a nice sounding TS variant.
From the source:
Plumes is a unique, all-analog approach to a classic tube-like overdrive circuit offering 3 different clipping voices, loads of headroom and almost three-dimensional clarity that will push your amp over the edge. The reimagined tone control is finely tuned to sculpt low end, clear top end, and focus midrange with blooming sustain.

Plumes is an overdrive based around that classically overdone tube-like circuit you all know, and amps crave. While this particular circuit has been done to death, we here at EarthQuaker Devices brand of special effects pedals think the Plumes offers an original take on the old, tired dead horse everyone loves to beat on. You can’t get enough of it, so we are giving you some more. Doctor’s orders and what not….

For starters, we’ve done away with the sacred 4558 IC and the classic BJT transistor buffers and replaced them with JFET operational amplifiers and raised the input impedance to nearly 10 megaohms! This offers lower noise, better signal integrity and more chime in the high end. We power this OpAmp by taking the 9v input and internally converting it to +/- 9v to give it more headroom. The end result is a more three-dimensional tone with added clarity that really pushes a nice tube amp over the edge. You might notice how those badass leads you’re always ripping will blast over those awful, no good cymbals your drummer is constantly bashing around on. It sounds like diamonds…a million f**king diamonds!

We’ve also added three different clipping options for your consideration. Mode 1 is symmetrical clipping utilizing a pair of light emitting diodes. This is the crunchiest setting the Plumes has to offer. When played through a clean amp, it’ll deliver a reasonable facsimile of that classic black and gold British valve amp tone. If you already set your amp dirty, using this mode will make it filthy. Mode 2 is clean boost mode. This eliminates the soft clipping diodes altogether and leaves you with straight OpAmp drive. This is perfect for pushing your clean tone out in front or driving the preamp of an already overdriven amp into tasteful breakup territory. Mode 3 is an asymmetrical silicon diode arrangement similar to the stock screamer but with more output and clean clarity; the tone some people describe as “transparent”. It’s almost as if your clean tone is blended in with a slightly less clean tone, ya know? Using this mode gives a warmer low-end response and lower output. It’s less hard on your amp and your ears. It’s a classic pleasant tone the whole band can enjoy.

Not enough for you? We’ve also improved the way the classic tone control operates while still leaving it familiar enough to keep you warm and comfortable. It’s still a safe space, no worries in here. It’s now useful through the whole range. The low end is big and clear, and the high end is bright and cutting without killing the mids. Just the right amount of tonal tickling to excite those ear drums yet still give that familiar mid-heavy drive. 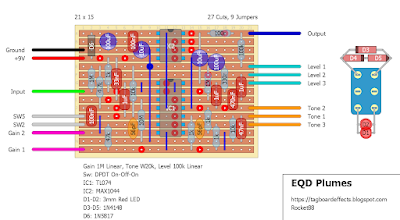 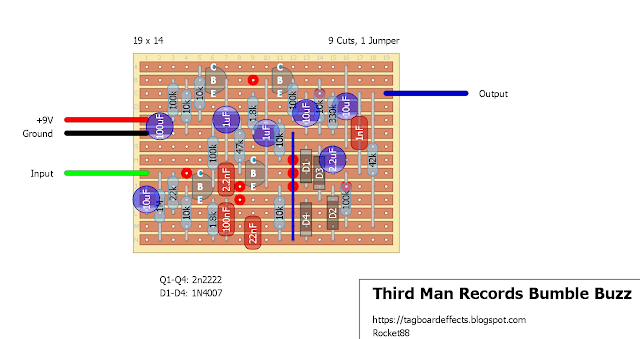 At last... a classic fuzztone for bass!  This transistorized beauty uses germanium diodes for soft knee clipping and actually boosts the bottom to give you awesome sustain with rich creamy fuzztone.  Wonderful overtones and plenty of thump to boot. 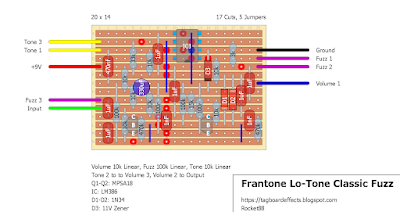 This is one of my favorite bizarre and unique fuzzes of all time. Gnarly, spacey, heavy, and broken. Nothing else sounds like it.

Induction on the forum a long time ago talked about how to make it so you can daisychain this beast, because you couldn't with the original. I found floating around in my files a schematic with the modification, so I figured why not just whip up a board. 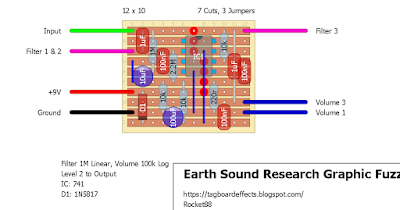 
Limited to 1500 units worldwide, Black Ash is a fuzz/overdrive that takes some cues from the vintage “three-knob Bender.” It uses a highly curated cache of rare and irreplaceable components including paper-in-oil capacitors and NOS half-watt carbon composition resistors from EQD President Jamie Stillman’s personal stash to light a fire under this classic fuzz/drive with an explosive-yet-detailed treble response, a sturdy midrange, and subterranean bass extension.
Posted by Zach at 21:34 47 comments

Surprised this one hasn't been done. A nice small and quick build, and should have lots of boost on tap and fatten up your tone nicely. Could be a good platform to mod to taste. Seems to be on the rare side to boot. Only video I could find was a DIY build that has some mods, but you get the idea.


Sorry for such a long delay in publishing some new layouts, there's been a lot of changes going of for me which has taken up a lot of my time to sit and make some new layouts. Shortened version: became a doctor, had my first child with my wife, got a new job practicing, lots of home projects around the house, and COVID. Here's the first of many new ones from me coming at you. Figured I'd start with something familiar to all the fuzz lovers out there, as you can never have enough muffs.

The Cloven Hoof is an extension of Earthquaker Devices popular Hoof fuzz, only more… cloven. Earthquaker kept the clarity of the Hoof along with the wide range of dirt tones and redesigned everything around it. The Cloven Hoof delivers a grittier, more bass heavy tone with more crunch that can not be achieved with the standard Hoof. They did away with the germanium transistors and replaced them with 4 specially selected silicon transistors for higher gains, cleaner cleans and improved temperature stability. The fuzz control has four times the range of the regular Hoof, it will go from completely clean to an all out fuzz fury with more grind at the top end of the dial. The tone control has been refined to allow a more even sweep with enough mids to handle all the additional low end. The shift control still boosts or cuts the mids and there is still a TON of output on tap. The Cloven Hoof is the perfect solution for those of you who always wished the Hoof had more. Each Cloven Hoof is made by hand in the majestic mountain top village of Akron, Ohio. 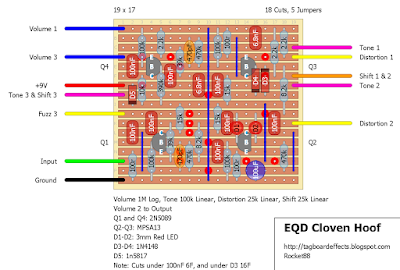 Original info:
"The Space Spiral is a dark and dreamy modulated delay designed to take you across the highways of fantasy. While the delay may be designed around a “dawn of digital” echo processor, the sound is out of this world, man. If you are a fan of the dreary echoes produced by old oil can delays or the ethereal sound of a well-loved tape delay, the Space Spiral is totally going to tickle your tone bone.
The Space Spiral’s delay time ranges from a tight 30ms to a fast and loose 600ms."

Schematic, pcb and info available on pedalpcb website here.
It should fit in a 125B size enclosure. 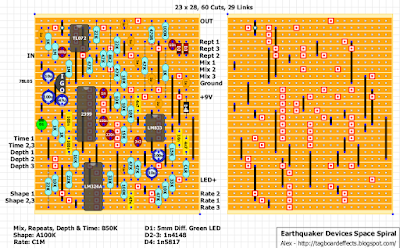 "Fredrik Thordendal’s signature 33 pedal is a sonic detonator tool that will transform any amplifier into a metal wrecking ball machine!"
Schematic and pcb available on Pedalpcb website here.

Original Info:
The Warden is an optical compressor with a feature set usually reserved for studio grade units. Built with high grade components and internally powered by 18v, The Warden has loads of gain and sustain on tap. With complete control over attack, release, sustain and ratio, The Warden will allow everything from a heavy squash with fast attack and release to “barely there” subtle compression. Optical compression has a reputation for having more character than a VCA or FET based compression and The Warden is no exception.

There was already an old post for this pedal that had been put on hold.
It was easier to start a new one to avoid confusion
I've used the schematic from pedalpcb for this layout. 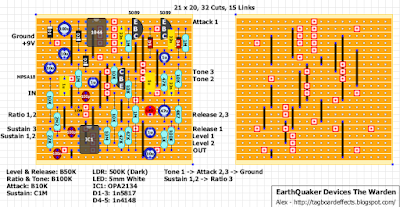