Here's one for Syd Barrett era Pink Floyd fans. This is the pedal Syd used on tracks like "Interstellar Overdrive". It's more like a buzzy overdrive than a typical fuzz pedal.

I will probably build this with .15" pitch stripboard but you can use .1" pitch as well. The bottom strip is for mounting the board on standoffs but if you're not using standoffs you can cut that row off.

This pedal is normally powered off a pair of AA batteries for the -3V. For daisy chaining you could use the inverter + regulator daughter board that Mark posted with his Maestro FZ-1 layout 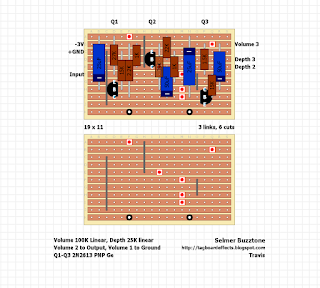 Here's the layout with the requested switchable gain boost mod 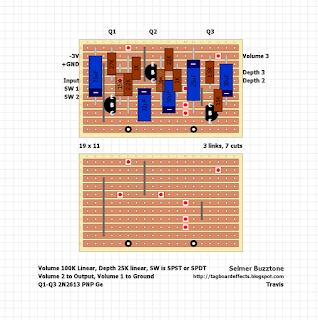 the requested layout with inverter and regulator onboard. This is unverified 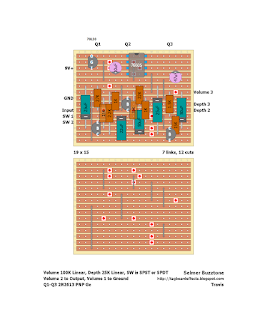 Who's got their AA battery clip ready? Mark has already drawn the Maestro FZ-1, so here's my layout for the FZ-1A.

You may want to try your PNP trannies that have a little bit of leakage to get this going. I've been pondering the best solution for powering this off a daisy chain, and I'm open to suggestions. You could use a charge pump and diodes in series to drop the voltage, but that's a bit of a complicated solution. Does anyone have a 1.5V regulator that they suggest?

I prefer to use my FZ-1A with humbuckers. Low output single coils don't get a very saturated fuzz 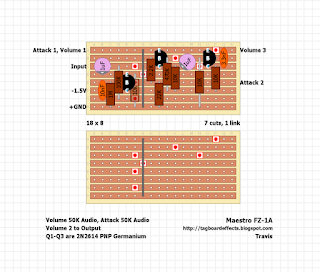 Hey Guys! Zach(rocket88) here and I'm very excited to join the tagboardeffects squad. So first, just have to thanks to Mark and Miro for not just the opportunity, but for really teaching me along the way so that I could even be in this position. I also have to give a big up, and thanks the rest of crew, Travis, Javi, and Alex. We're all in for an amazing ride, and great time to be a part of the site. But, onto my first post for the main site!

As some of you may know, I have been dubbed the Emperor of the Germanium Deathstar, mostly due to my obsession for all things Germanium. Awhile back there was a request for a layout for Nick Greer's Green Giant, which really was nothing more then an Electra Boost with a pot to control the amount of signal that gets clipped by the diodes.

With Beaker, there was some R&D on this effect that ended up finding that the original Electra was all Germanium, so it was changed from all Silicon to all Germanium. This turned out to be not just a simple effect to build, but an amazing sounding one to boot. All of the discussion on it can be found in the Contributions thread, but there has been a lot of requests to make an official layout, which you will find below.

Now a couple of things to remember with this effect:

1 - you can use any diode, Si, Ge, LED, BAT, etc. as each one will give its own flavor, so socket the diodes and try whatever you got.

2 - you can use any NPN Germanium transistor, as they will change the effect slightly. MP38's are a little dark, tesla 104NU71 are a little brighter. so don't be afraid to experiment, but try to keep it less then 100hfe

3 - the trimmer sets the bias, you can do this by ear.

I figured I'd include a PNP version, as some people may have a lot more PNP Germanium Transistors then NPN ones. This layout is also verified, but, and this is a huge but, you will need to audition transistors, as no one really said what they used that sounded good. Do NOT use AC125's or AC128's as they will not sound good at all in this circuit, so you will be majorly disappointed if you try to use them.

Requested PNP layout without the inverter.

Also, i forgot to say to socket the input and output caps to. i found the stock 100nF caps to be a little more trebley then I'ld like, especially for my bass. In mine I've got 470nF caps for both input and output caps, which makes it much fuller, and retains the all the low end of my bass when compared to the bypassed signal. So by all means try different combinations.
Posted by Zach at 03:55 55 comments

Hello folks! Travis here and I'm very excited to join the tagboardeffects squad. Thanks to Mark and Miro for the opportunity, and thanks to Zach, Javi, and Alex for joining along as well. I'm sure we're gonna have a great time, so without further adieu, here's my first contribution to the main site!

As some of you may know, I was lucky enough to pick up an original germanium transistor equipped Mosrite Fuzzrite earlier this year. It has without a doubt been my favorite pedal I've ever owned, and I traced the circuit to share with you fine folks.

EDIT: There were some mistakes in my initial trace due to a couple hidden links and an oddity with one cap connection. I have updated the layout, and this is your standard Ge Fuzzrite with component values matching mine, and an added voltage inverter for easy daisy chaining 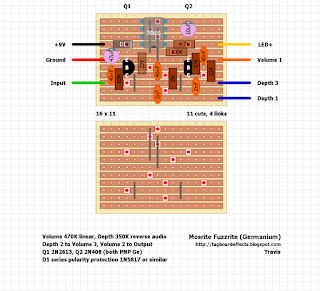 We've been posting tagboard and vero layouts for 5 years now and with myself and Miro being quiet for a while people have expressed some concern about where the site is going.  We have no intention of giving up on DIY but sometimes personal commitments take over and talking from a personal perspective a combination of a trapped nerve, a death in the family and a new job have taken a lot out of me.  It was impossible to concentrate like I needed to when I had the trapped nerve and by the time that had cleared up to the point I could, other things came up one after another to the point when the little bit of free time I got I just wanted to relax rather than spend hours squinting at schematics.

But we have built a great community here, something that is emphasised by a quick scan in the forum where some excellent topics are discussed and new circuits developed, with a continually enthusiastic audience.  So I think the site deserves a shot in the arm and something to get it moving again, maybe in different directions.

As such myself and Miro have spoken before about having more administrators and authors on the blog and it is with pleasure that we can now introduce Javi (JaviCAP), Zach (rocket88), Travis (Travis) :o), and Alex80 (Alex) as new administrators and authors.  All have been active members for a long time now and have helped make the blog and especially the forum a great place to be.

This isn't necessarily to just add new layouts to the blog because there really isn't as many to go at now we've posted over 800 layouts, but also potentially to move in other directions to appeal to a wider audience.  So posts about general DIY, tips and tricks, and other things that will be of interest to people can help liven the place up and give people some interesting opinions to read.  There can also never be too many people to answer questions! :o)

So we have increased the numbers by 4 at this stage, but there are a number of other people on the blog and forum who have been great members of the site and contributed massively, and to be honest I am happy to increase the admin numbers more if some other people think they have something they would like to contribute.  Be that vero, perf or maybe PCB layouts.  General DIY posts?  Or what about amps?  I'm happy for us to go in whatever direction the members here want, and I'm always available on email if anyone wants a chat about it.

At the end of the day I want us to provide something for everyone interested in DIY am sure that the guys we have asked will help us do that.