The Wampler Sovereign Distortion is a versatile beast of a distortion pedal that is unlike the rest of its ilk. The gain is rich and full of harmonic overtones, never sounding or feeling fake and stiff. Surprisingly shapeable and responsive, the non-traditional gain and EQ controls allow you to tune the pedal to suit any setup, and instead of just emphasizing a certain frequency range, they actually change the texture of the gain. With the right settings dialed up, it can nail the elusive sludgy deep sound loved by stoner metal guitarists, along with virtually every other shade of high-gain tone a player can imagine.
You can find original thread and schematic on FSB forum here. 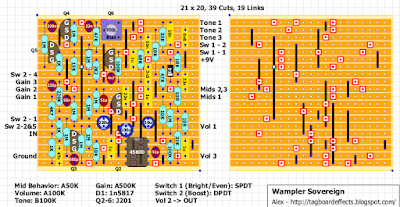 Here is a layout for the Rockett Flex Drive.
You can find original thread and schematic here.
The layout has already been verified by Gavin (Hozy31).
Gavin said: "It seems biasing the drain to 4.5v is not the way to go. You need to turn it until you get decent volume on all switch 2 positions"

Here is another great pedal we didn't have a layout for.
You can find original thread and schematic here.

This was an old request.
You can find all info and schematic on Runoffgroove website here.

And a version with an added Notch Depth switch.

Possibly the World's cleanest, most transparent boost. It utilizes the 7660S charge pump's ability to take a standard 9v power supply and output both +18v and -9v. The op-amp based boost circuit takes advantage of the whopping 27v differential to produce 20dB with an amazing amount of headroom. It doesn't matter if you're using active pickups - you will not get any clipping from this boost. Slam it with another boost, it still won't clip! The treble control allows you to cut/boost frequencies above 3k3Hz by 6dB.

To be honest, it's not as small neat as I would like it due to the three different power connections, but here she is. 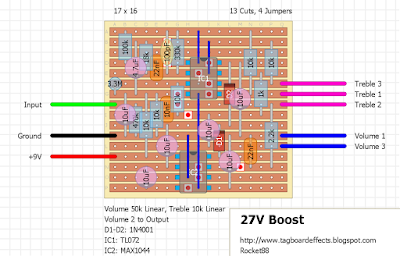 On the site it says it uses a 7660s for the charge pump, but the schematic shows a MAX1044, remember the two are interchangeable.
Posted by Zach at 05:45 36 comments 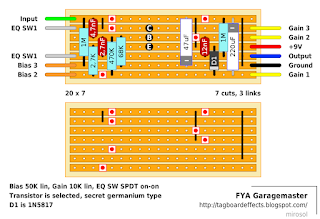 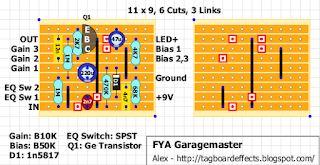 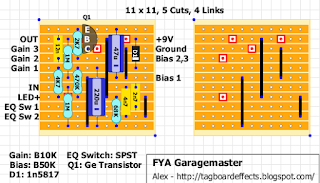 Another circuit by Mesa Boogie.
This one uses an Inductor, a dual LED and a different Bypass Switch wiring.
There's already an unverified layout (multiple boards) by Savvas in the Contributions section of the forum but I wanted to add one on a single board.
You can find the original thread and schematic here.

A slightly modified version of Xotic BB Preamp from Mesa Boogie.
You can find original thread and schematic here. 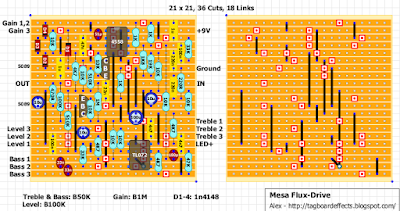 A "Mini" version of Smallsound/Bigsound Fuck Overdrive.
Thanks to Brian for uploading his original schematic!
(You can find original thread and schematic here.)