This one is pretty simple. It's the new smaller Belton/Accutronics brick and a quad op amp, a Reverb Mix control and a tone control I'm calling "Dampen". It's a dead-simple low-pass filter right off the brick's output (or rather, one of the outputs) in parallel with a fixed cap to ground. I got that little idea from earthones' suggestion of a tone control for the 2399 reverb I did. (credit where due!) I'd say this is about 75% similar to the application note, but with the added tone control, slightly different filtering, and buffered VREF.

I've tried this with the Medium and Long decay bricks. The Long can definitely get some cool ambient spacy sounds going on. And with the tone control at min, it's really bright (either brick type). The only difference I can hear is the decay time.


You can get the Belton bricks from Musikding here.  I'd suggest going for the BTDR-2H because it's smaller, but have included a layout for the older BTDR-1H bricks as well, just in case someone has one they want to use. 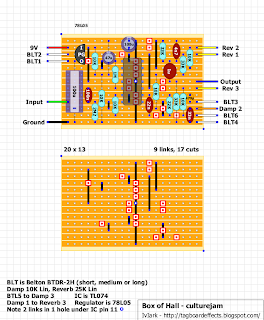 and one for the older BTDR-1H bricks: 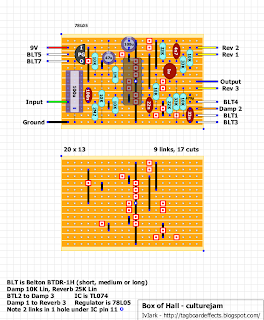 It seems to be very popular so here's the Box of Hall - Heavenwithin modded version. 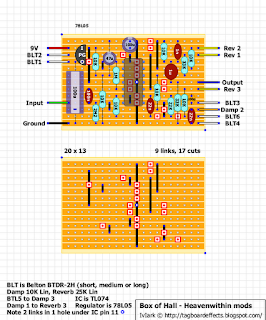