Requested.  This is a slightly modified Triangle clone that some others may also be interested in.  The original used buffered bypass and FET switching but this has removed those components and is designed to be used with external mechanical bypass switching of some description such as a 3PDT stomp switch.

The scheme that I did this from noted 2SC1815's as the transistors, but I've got a batch of these and based on those I would imagine most people would be disappointed with their performance in this.  The datasheet lists them as 70 - 700 hfe, but mine are all on the low side, and nowhere near the 600 - 650 hfe you'd ideally want for a Triangle clone.  I'd suggest using a 2N5088/5089 or maybe a BC550C (transistors rotated 180 degrees to that shown in the layout) which should get you in the right ball park for gain.  As such the transistors shown in this have a CBE pinout, but if you want to use the 2SC1815 which are BCE, you will need to insulate the legs and twist round the base and collector.

The original schematic also showed the Tone pot to have a W taper, but these aren't very common so I'd suggest using a linear pot as in most Muffs. 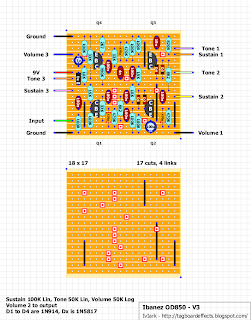