And so on to the next AMT pedal, this one is based on the Bognor Triple Giant Sharp Channel.  I've included trimmers with this one to help bias the alternative JFETs so this may be a better one to start with if you're interested in building an AMT pedal.  I haven't included the cab sim, but you should be able to use the one shown in the AMT S1 layout.  At 23 columns wide it will only fit in a 1590B vertically, but I wasn't too bothered about keeping the size down with this one because I think most people would want to put a 5 knob effect in a 1590BB size box.

Info from AMT about the original:


The B1 Legend Amp Series pedal, superior high gain quality distortion, as found in the Bogner Sharp Channel Amplifier*. The sound of the AMT B1 is monstrous in tone, aggression, and provides massive amounts of gain. Thunderous lows, screaming highs, and scoopable mids leave you with unbeatable heavy distortion sounds. This one could be the "kick" your guitar rig has been needing.

•  The AMT Legend Amp Series guitar pedals provide excellent dynamics, nuances, and characteristics similar to that of tube driven amplifiers.
•  Tube-like range of volume control provides great sound density, playability, and power when playing at full volume and also in conjunction with your guitars volume knob.
•  TRUE BYPASS. The preamps of the Legend Amp Series pedals use passive true bypass circuitry, therefore no loss of guitar signal is noticed in your pedal chain. Similar to if no pedal was there at all when bypassed.
•  Features high level of output signal (+10dB in extreme position of Level knob) corresponds to the output levels similar of tube preamps. Thus, you have adjustable signal level allowing to hook up your preamp AND direct input of a power amplifier.
• Controls include LEVEL, GAIN, LOW, MID, and HIGH.
• TWO signal outputs: DIRECT AMPLIFIER OUT for guitar amplifier use and CAB SIMULATION OUT for mixer, or studio use. 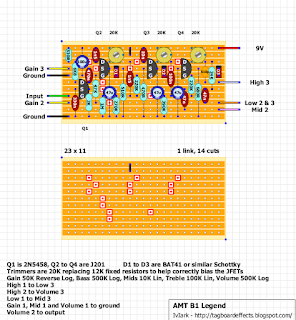 Update 1: The person who prepared the schematic has posted that he has noticed an issue and he needs to correct it, so hold off on making this until we can get some confirmation of the scheme it is based on.

Update 2: I will do a new B1 vero layout based on the corrected schematic, but in the meantime if you have started building this version, you can complete it by using the daughterboard shown below: 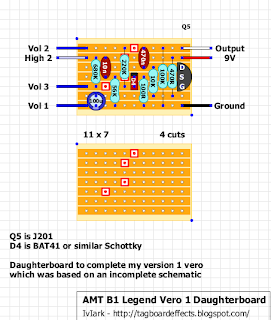