Hi yall. Noticed a week or so back that it's been exactly ten years since my first post here. To celebrate the occasion, i thought i'd post something. There's been a number of slower years along the way, but so it goes. Life has it's ups and downs. To quote one of the more interesting british bands i've found in recent years: "It's alright now. Not what you hoped for, but that's ok. Teenage hopes are never less than perfect anyway."

Now for the layout. There had been a trace up on FSB for years and it seemed a bit wonky on couple of details. Vitalii checked his unit out and there were a couple of errors on that old trace. His new trace seems to be spot on. Now, this probably won't be the low-parts-count / easy build alternative for HM-2 style sounds, but this may still be nice 1590B-sized build with enough distorion. There's also room for tweaking. For examble, one could sub one or even both clipping diode pairs for LEDs or Schottkys or use a on/off/on switch for changing them on the fly. Hi/Lo gyrator controls seem to be quite effective as well. I bet this will be a fun distortion build with no special parts required.

Sadly, no youtube demos to be found.. Should you build one of these and a make a demo? ...So i could post it up? 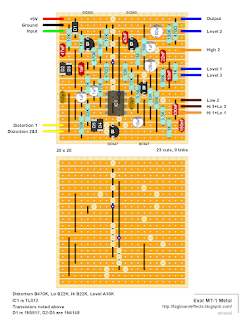 Another damn nice trace that's up on FSB, by Joe from Grey Bench Electronics. This one seems to be a very limited run distortion from Barber, built around the time of the millennium madness. 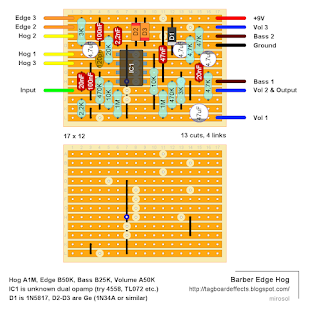 There was a great post from Grey Bench on FSB, tracing this ten year old Stafford Maxon circuit that i found interesting back in a day, but couldn't source a schematic back then. This is per original, using only a half of a dual opamp and utilizing a 12x21 board. 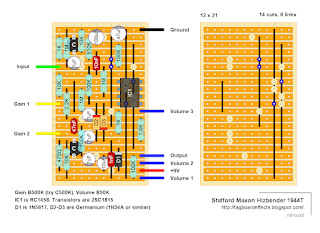 George Giblet did a trace (and some guesswork on the cap values) on FSB a few years back. The cap values might not be 100% per original, but according to George, those should be at least close enough. There are a few ideas on this late 60's circuit that are not present on every single FF/TB-clone out there, so i thought this migh be nice and fun little circuit to try out. Not sure if i built one back when this was drawn. Seems i can't remenber everything that went on in 2019. Seems so long ago now.

However. This might be fun to build and to tweak to your liking. Note the transistor pinouts as those match 2SC828s. Parallel polarity protection is in place etc. I'm fairly certain you'll get this sounding good with modern values for resistors as well. 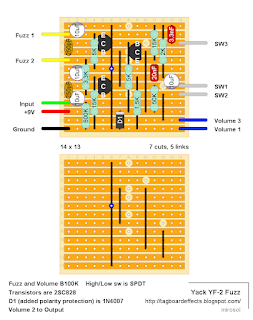 From America's Pedal:
DOD introduced the Corrosion distortion pedal (FX70C) in mid-1997. With basically the same circuit as the FX70 Metal X, the Corrosion featured a heavily oxidized metal finish and no paint except red (1997-98) or black (1999) graphics near the control knobs; the first version with red graphics appears to have been more rare. In 1999 the final version with black graphics was introduced, with the model name in a two-tone box to match the appearance of the final series of DOD pedals. However, the Corrosion did not use the same casing or switch, and may have been revived to profitably use up the last remaining second-series parts. It is unclear if either version of the Corrosion was ever featured in DOD advertising or catalogs, but because of its raw, unfinished appearance, sales were probably slower than the Metal X. The Corrosion was discontinued when production of all FX-series pedals officially shifted to China in late 1999. 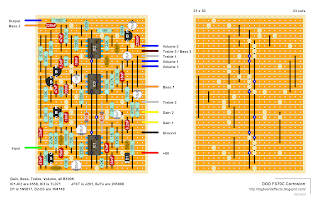