Another one for Miro because I know how much he loves JFETs! :o)

Brian Marshall of Subdecay is one of those builders who adds a lot to the DIY community.  He openly discusses the technology behind his products and has even corrected errors that have been made in schematics.  The Liquid Sunshine is out of production, but being one of the few builders now who does seem to be producing innovative products rather than rehashing the same old thing with different caps and claiming 1000 hours R&D, his other stuff is highly recommended if you're wondering what your next purchase should be.

Info from Brian about his original:

Low gain settings render tube power amp like compression. Add a bit more drive to gracefully ride the line between almost clean and a hint of breakup. Turn both drive controls near max for some classy sustaining rock overdrive. The all jFET design does not produce any “sharp edges” or hard clipping.

Is The Liquid Sunshine for me?

Equally well suited as an overdrive for a clean amplifier, or pushing cranked amp over the edge. This is especially important if you need an overdrive that works at many volumes. It won’t feel out of place on stage, at rehearsal or simply practicing at home.

The Liquid Sunshine absolutely loves being stacked. It’s great for pushing other drive pedals, but unlike many other low gain overdrives it excels when pushed by other dirt boxes too.

It’s also great for warming up your tone. Many modern amplifiers are biased cold. This may result in tubes lasting longer, which is especially important if the amp maker supplies the cheapest tubes available. It might even make an amp a little bit louder. Unfortunately this doesn’t always make for great tone. The Liquid Sunshine is a perfect match for amplifiers that leave you wanting more.

Many users of The Liquid Sunshine have used words like “tweedy” or “voxy” to describe its overdrive tone. This overdrive is not an “amp in a can” device. Often these designs will create a facsimile of amp tones, but often deliver unexpected depending on what amplifier is used. The design philosophy of this overdrive is to “play nice” with your tone. The Liquid Sunshine enhances what you already have.  It won’t make your amplifier sound like something it’s not. 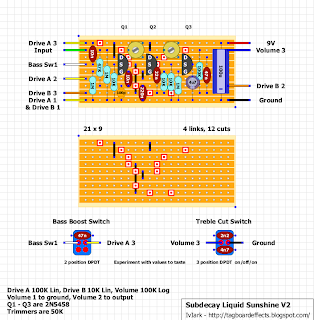