So close to the Ross Compressor that the 2-knob versions seems to be essentially verbatim, but I thought the 4 knob version was worth adding for the additional Clip and Attack controls.  In the original the onboard trimmer isn't used and instead two 1K resistors were used between the bottom lug of the (top left) 220K and IC pins 2 and 3.  Rather than adding fixed resistors I thought it made more sense to leave the 2K trimmer and suggest leaving it in the dead centre position for the stock setting, and so allowing the Clip pot to perform that task, which would mean that you will have some additional tweaking capability to set the base input level using the trimmer which you wouldn't get from the Keeley.  So maybe this can be the 4½-Knob Compressor! :o)

Info from RK about the original:


The Keeley Compressor is the award winning industry standard for stomp box compression. The 4 Knob adds Input Clipping and Attack controls to the top of the the original Keeley compressor for easy adjustment. Perfect for those that often switch live between single coils and humbuckers. The sound alone will inspire your creativity.

All of our Compressors are hand built in the USA. Unlike any other compressor, the Keeley Compressor was given the Editor’s Pick Award from Guitar Player’s Magazine and recently awarded Reader’s Choice for Stomp Box. It is a true audiophile and studio grade compressor with an exotic rack mount quality in a stomp box form. 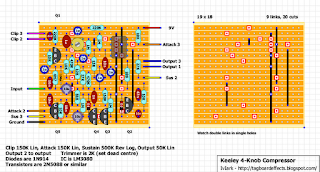 After a few people mentioned wanting to use resistors instead of the trimmer and so mean that it's one less "special item" you have to get in, here's a rejigged revision with the 1K resistors.  I still think I'll build it with the trimmer because I like the idea of that fine tuning ability, but you can build whichever version you prefer. 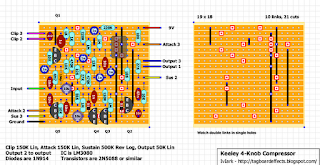