The FUNK MACHINE is a synthesizer that can be used with any amplified musical instrument. Bass Guitar ... Guitar .. . Fender Rhodes ... Harmonica ... Horns .. . Clavinet.

The FUNK MACHINE is primarily designed for use with Bass Guitar, but you will find that all other instruments will work very well. On Bass Guitar you get a sound that Is heard everywhere in recording these days. The unusual sounds coming from the Basses of Larry Graham, Sly Stone, Tower of Power, and Stanley Clarke are characteristic of the sounds of the Funk Machine.

Unlike most control knobs that are associated with electronic apparatus the FUNK MACHINE does not get its best effect by turning both controls to their full on position. In fact the FUNK MACHINE would get its worst effect by doing so. To get the best results read the instructions carefully.

1. Turn both controls on the FUNK MACHINE off.

2. Turn the volume control on the instrument to its full on position.

3. The FUNK MACHINE is voltage controlled meaning that the harder the note is struck the greater the FUNK EFFECT. Bear this in mind because as you adjust the controls you are as much responsible for the sound as the FUNK MACHINE.

6. NOTE FOR BASS GUITAR: The FUNK MACHINE can be used as a sub-harmonic bass filter which will cleanly lower the bass response by two full octaves. To accomplish this simply turn the FILTER RANGE control off and use the FREQUENCY SHIFT control only.

7. Unplug the unit when not in use to increase battery life.

A helpful hint for the FUNK MACHINE as well as your other effects is to use a Y cord from your guitar into the second channel of your AMP. By splitting the signal you don't loose any of the natural response from your AMP while using effects.

Demo of the V1 Funk Machine without the Frequency Shift conrol, but should still give you a good idea of what to expect. 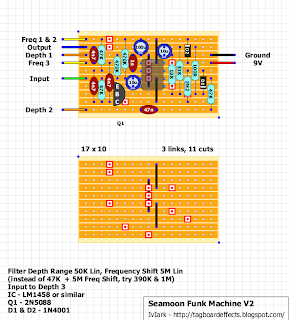