This will probably be a popular build for people who use a Fuzz Face (or similar) and also an older style wah, and have a problem putting them in the usual order.  Info from Foxrox about their original:

The Foxrox Wah Retrofit is a self-contained JFET buffer/amp circuit that gets installed into your Wah Wah pedal, giving it the ability to cut through any Fuzz Face or Fuzz Face clone. By essentially installing a "real" output section, the Wah Wah pedal becomes immune to the effects of loading, restoring range and depth to older, vintage Wah Wah pedals without affecting their vintage value. Newer, high-end "boutique" wah pedals, such as Teese RMC pedals also benefit from this mod because they are based on the same, classic inductor-based circuit. Since it is a basic JFET audio buffer/amplifier, this circuit can also be added to effects pedals that need more output, as well as effects that need more drive at the input. 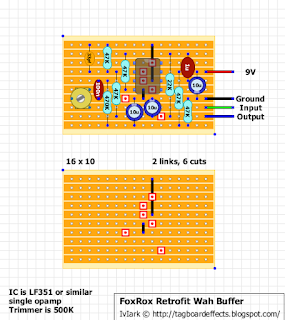