Geiri verified this one and made a cool demo! On his build, the gain pot is wired in reverse - that has been fixed in the layout below.
Mark Hammer's Chaos Distortion is turning 10. From Mark Hammer: A friend's son wanted a heavy-metal kind of thing so I thought I'd try and do something from scratch using a cookbook approach. I liked the tone control in Alexandros Charissis' "Ballz Booster", so i used that, but it became apparent that the passive loss of this tone control would need either a very hot signal or additional gain recovery. I opted to use two cascaded op-amp clippers to bring the signal level up enough that it could still push an amp, and add sufficient sizzle to make the kid happy. To make sure that the diode clipping would produce enough volume, I used a 2+2 back to back pair for the final stage since that wouldn't clip until a much higher threshold. The first stage uses asymmetrical clipping for no special reason, other than wanting a balance between larger output and not needing too much gain from the first stage. It applies gain up to 101, with a high end rolloff at 7.2khz. Nothing terribly magical there but since the first stage lops the wave at a maximum 1.5V peak-to-peak, I needed to bring the level up to get enough clipping using a pair of diodes. The Ballz Buster uses a 220pf cap on the treble side of the tone control and I found it didn't have enough presence for me. A slightly higher value of 390pf fixed that and gives plenty of mid-bit. At the bass end, it gives a nice round chunky tone. I like it.

The ton is surprisingly flexible, ranging from vocal-sounding grind at low-gain, bass setting to searing over-the-top headbanger tone at high treble, high-gain settings. At max gain and output it is a couple db over the level of the straight signal, so it won't pummel your amp. I used lowly 1458 dual op-amp for no special reason and it sounds decent with little hiss. It might conceivably sound better with a different op-ampm but quite frankly, the double clipping masks whatever differences there might be between op-amps. The Vref is simply midpoint of the supply voltage, using a pair of 10K resistors and a 10uf cap to supply the Vref. The Gain and Tone pots are linear and the Volume pot is a log.

I wouldn't consider it my favourite fuzz, since i'm not a big fan of metal, but it does the job well and can be VERY intense. If your pickups are microphonicm this will let you know in a hurry. I guess the most interesting feature is that the use os a low-ish rolloff in the first stage means that at lower gain there is less high end and mids to clip in the second stage. Turning up the gain doesn't provide that big a level boost but it starts to present the second stage with a clippied sound that has much more midrange and treble content, yielding a different sounding clipping, not just more clipping. Between the different clipping qualities and the neat tone control, a lot of flexibility for just three controls.

I'd recommend to socket the opamp and try on a variety of chips. I think there should be noticeable difference between LM1458, AD712, NE5532 and TL082. 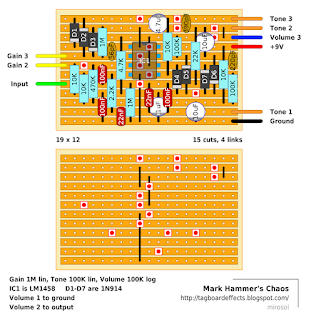