I did this one ages ago and never posted it for some reason, so I may as well add it now. Info about the original:

Ah! the Catalinbread Sagrado Poblano Picoso! The Poblano Picoso has many of the great features as the Super Chili Picoso except that the Poblano is tuned for an extended frequency range. This has been one of my most frequently requested modification of the SCP for bass players.

Just because the Sagrado Poblano Picoso is tuned to better suit the range of bass instruments it does not mean it is limited to this application! With gobs of tone drenched boost, it can drive the input of any amp. The trade off for the extended frequency range is reduced headroom. So at it's highest settings you will find that Poblano is a bit more gritty than other 'clean boosts'. The added grit is complimentary to guitars and has the happy side effect of making solid state amps sound warmer. We decided that this was a great pedal when I plugged my P-Bass into the Poblano then into my band's 400W solid state bass amp and was instantly taken back to the first time I experienced the world's greatest bass amp the SVT. We decided to release it to the public as soon as we heard how well it sounded in a guitar rig.

I can't find a demo vid but here's the Super Chili Picoso which is the guitar version: 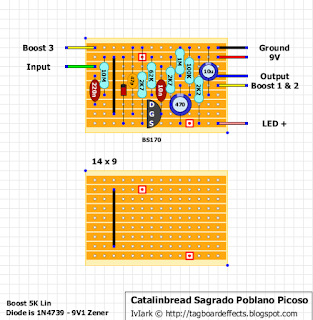