On the original unit, the chip used is TL022, which is low power dual opamp - But the other half doesn't touch the effect side at all - It's only used as a buffer for the bypassed signal. So i made the layout to house a single opamp instead. TL061 is low power single opamp from the same family of chips - so i believe it should sound pretty close to the original. 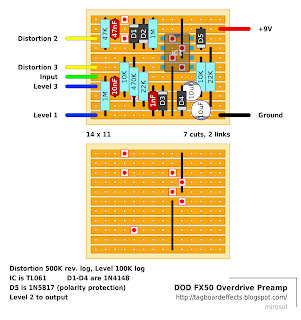