Request.  Manufacturers info about the reissue version which is a circuit match:

The WH10V2 features the same circuit as the original with one major upgrade: a very sturdy metal housing. Ready now for the rigors of the road, the WH10V2 features the same multiple feedback opamp circuit as the original, a type rarely found in today's wah pedals. Tweakage is accomplished with a depth knob to control to level of the wah effect and a dry out for mixing a dry signal with the wah sound. The unique sonic character of the WH10V2 sets it apart from all other in its class. 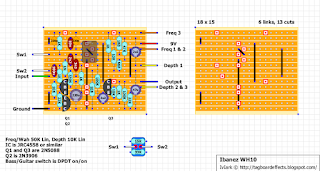