Request.  Info about the original project in Practical Electronics:

Of all the effects units for electric guitars, fuzz is undoubtedly the most popular and numerous designs have appeared in Practical Electronics and other magazines over the years. So why yet another fuzz unit?

In principle fuzz is easy to produce; all one has to do is distort the signal. But in practice it is very difficult to obtain just the right amount and the right character of distortion, and most designs end up producing a sound which is unpleasantly harsh and rasping. We know because we have tried many of them. Some designs use a Schmitt trigger circuit to 'square up' the input waveform and these tend to give very poor results as the output remains absolutely constant up to a certain point and then suddenly stops. Also a guitar produces a large transient at the start of a note and in some designs this causes momentary blocking due to coupling capacitors charging up. This produces a disconcerting 'hiccup' in the output.

What the professional musician usually wants is a more refined sound-a fuzz unit which gives the guitar tone which is 'different' rather than obviously distorted and gives a limited sustain without completely destroying the dynamics of the input signal. The unit described here will do just this and that is why we have called it 'smooth fuzz'.

The first part of the circuit. around IC1 a performs two functions-it provides a voltage gain of about 60 to raise the input signal to a suitable level to operate IC 1 b, and it acts as a low pass filter with a cut-off at about 1kHz and a slope of 18dB per octave. This removes the higher harmonics of the strings and so reduces the number of intermodulation products produced by the following stage. IC1 b is the distortion generator. Very small signals are passed without distortion, but as the output voltage rises above about ±0 · 5 volts diodes 01 and 02 conduct, providing gradual limiting of the signal. The output waveform produced by this stage varies as shown in Fig. 3 as the input signal is increased.

Although the waveform distortion produced by this stage is not excessive the direct output would still be a little too harsh for most peoples tastes, so two stages of additional filtering are provided by R9 and C8 and VR1 and C9. VR1 is the tone control and as it is varied from the C9 end to the C8 end the tone becomes progressively sharper.

Geiri's demo video of his build: 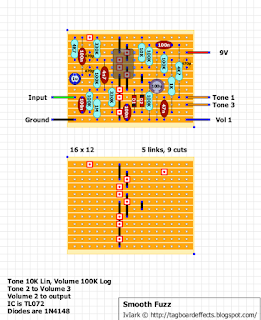