The Folk Driver is the result of a challenge issued to me by Björn Juhl to design an original DIY overdrive project that has much of the character of his popular Honey Bee Overdrive. After some time listening to an original Honey Bee, I came up with the Folk Driver.
Like the Honey Bee, this is best described as a “soft” or “jazz” overdrive, that breaks up more with hard chords than with single notes. The overall voice is warm and musical with a nice harmonic bite.
The Timbre control adjusts both the gain and the tonality simultaneously. At the 12 o’clock position, it is a neutral tone with minimum gain. When turned clockwise, gain increases with the high frequencies emphasized. When turned counterclockwise, gain increases with low frequencies emphasized. This makes it very easy to dial in the sound you want in an intuitive and novel way. 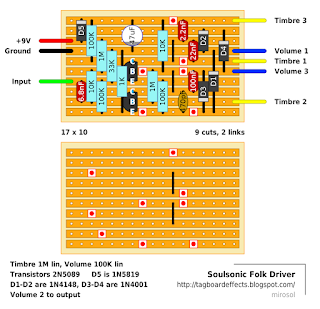