I can't exactly remember how i ran into this schematic. It is pretty old design and once again i'm having trouble finding more information about it. Anyway. I drew it up and built it. Made some slight changes to the original, such as adding the gain knob and one more 1n cap to tame its squeeling down a bit and changing input cap value to let more of the signal in. This is something that i personally enjoyed a lot. Flick of the switch turns it from warm, not completely unlike lightly overdriven Fender amp, smooth OD to high gain monster distortion. I used russian MP25B transistor that i grabbed from measured bag that has 41-50 hFE written on it. I do believe it would work just fine with any PNP transistor in there, but as the design goes, i'd still recommend relatively low gain germanium to be used. I tried different values for the taming the feedback loop, but 1n just felt like the right value. You could (and should) use what you like. I think i need to play around more with this schematic...

Notes from Jamie Heilman about his original Angry Beard III circuit:
The op-amp can be any lownoise single op-amp, the original used a NE5534.  The 2N44 could
probably be replaced by other PNP germanium transitors with out much change in sound.  The
switching aspect has been left out of this schem, but you will probably want to add a bypass of
some type to this effect.  The emphasis switch chooses a tone flavor, this could be expanded to
include a wider range of frequencies, but too small a cap value may cause oscillation.  Any attempt
at taming the internal gain of this effect has been left out, but could be easily added.  This can be
noisy depending on your rig, so a 10-15pf cap could be placed in the feedback loop of the op-amp
if your concerned about too much squeaking.

Little clip from my circuit. First up, the normal gain and then high. Recorded with single coils: 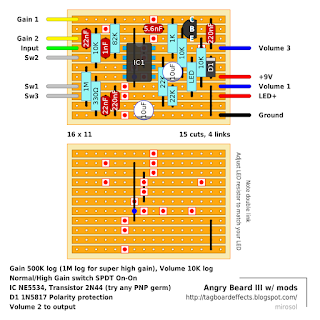