I'm not liking the asymmetry of the layout :( However, i believe it won't look that bad once it's populated on to the board. Original unit has 2SC1015 transistor, but i made this layout to accomodate more common pinouts. That transistor is so close to the specs of 2N3906 that i don't think that'll make any difference. Sadly - I didn't find any demos of this one...

According to the description below, it might be a great idea to stuff this into wah enclosure and use the tone pot  for wahhing. Should be pretty mean wah.

This pedal gives is a filtered distortion along the lines of a wah set to a stationary point in its sweep. The tone control is the key to the sound of this pedal. To the left, the tone acts like the up position of a wah. To the right, the tone acts like a wah in the down position. The center position is fairly neutral with no real bandpass filtering effect. It has a really cool electronic sound. Not too bassy but very computer like with a lot of high ends and static. 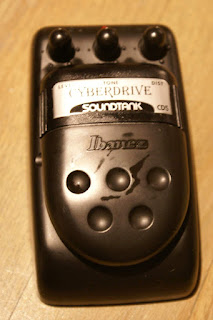 Built it to see if it works, and it does! I had some ticking power noise issues on the filter part, but using NE5532 for IC2, grounding the pot casings and placing the whole thing to metal box cleared all that up. 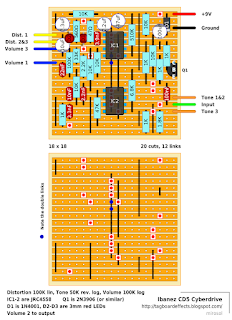