Note that in the layout, the 33pf cap was only marked as 33 and so not completely identified.  Someone suggested a 33n, someone else thought the 33p was more appropriate, so I suggest socketing that cap and seeing which works best.  Info about the original:

Introducing the Gain Stage Black™. Stripped clean and pure. The classic sound of an unmodded, unmolested, non-hotrodded, British 100W amp as it rolled off the assembly line in 1969. The sound that changed rock guitar forever. Take your favorite guitar, plug it into the Gain Stage Black feeding a clean amp and recreate the power and glory of pure rock and roll.

The Gain Stage Black started out in the design phase as a clean boost with character. I didn't want "transparency" , which to my ears, more often meant "sterile sounding. When the prototypes started sounding good, I experimented with how much gain to give the pedal. After getting it to where I thought it was a right, I had some folks play it with their rigs. When I asked them what I could do to make it better, they all said to give it some more gain. That is when it opened up and really became the Black! I began thinking it sounded very familiar to me at higher gain settings. That was when I fired up my vintage 100W and 50W Marshalls. Those very sounds were coming out of the Black when feeding a clean amp! I wanted to make sure I wasn't hearing things, so I built a handful of prototypes and sent them out to my beta-testers without telling them what I was hearing. To a man, all reported back that it was the most faithful reproduction of a classic cranked Marshall that they had heard.

There are several unique features incorporated into the Black's design. First and foremost, there are no clipping diodes utilized. This allows the pedal to be incredibly dynamic and amazingly responsive to the guitar's volume control. For a true old-school experience, leave the Black on and do it all from the guitar!

Another difference you will experience with the Black is how the Tone control works. Careful experiments led to the control affecting the narrow range of frequencies critical to the electric guitar. The entire control range produces a classic range of tones.

Finally, a speaker cabinet compensation circuit was designed, with the switch designations, "Closed" and "Open." In the Closed position, the black is leaner and works well with closed back cabinets, especially 4X12s. In the Open position, when using open-back combo amps, the "twack" of a closed-back cab is approximated. This was the intention but both positions can be used with any speaker cabinet type and you are encouraged to experiment! 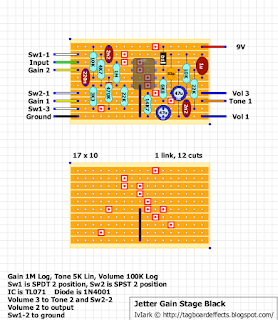