As pretty much everyone must know by now this pedal was a re-badged Joyo Ultimate Overdrive with 3 resistors added, and that in turn is a very lightly modded OCD.  But the TGP favourite Freekish Blues Alpha Drive does still have a lot of fans who will argue to their back teeth that the sound in more important than being deceived, bent over and shafted by a builder.  So I thought I may as well include a layout so we can build one and see for ourselves whether it is indeed worth losing all self respect over.

This could have been made simpler by using pot values which more closely matched the originals + parallel resistors but I didn't want to do that because this method will give you odd tapers which may be part of the "magic", and so I wanted this to be exactly as per the Alpha Drive.

The Joyo UOD made a couple of small changes from the OCD, including a couple of value swaps and a slight variation in the mosfet clipping.

I do expect this will sound and feel different than both the Joyo and the OCD, so certainly worth a build even if it's just for comparison purposes.  But I would like to stress that the $35 Joyo is extremely close to the $160 Fulltone OCD for those in the market now Voodoo Lab has stopped making them.

Amusing original BS:
Freekish Blues is proud to present one of the best overdrive pedals on the market:

Working closely with the east coast singer-songwriter, guitarist and Berklee Guitar professor, Freekish Blues has developed an ultra-sensitive, clear, amp-like overdrive pedal that cuts through where others fall short.

He had been in search of the ultimate versatile pedal that could deliver those tones along with a wider range of tones from rock to blues, from classic to contemporary and fusion. Even a relatively clean boost is possible with this pedal! The Alpha Drive has a very smooth but articulate quality that one will find pleasing.

This pedal has been played against some of the finest Dumble style amps and pedals on the market today. Pedals such as the Ethos Overdrive, Zendrive, Dumkudo & Zenkudo pedals. That being said the Alpha Drive at this price can't be beat.

The controls - Volume, OD and Tone - actually make a difference, and the pedal cleans up with a lowering of the guitar volume. Featuring a true mechanical bypass foot switch and internal components normally found in the circuits of tube amplifiers, this pedal is built like a tank! The battery can be changed in seconds with the easily accessible secure battery cover. No screwdriver required.

The Switch: The Rock up switch gives a little bit more of a midrange presence edge allowing you to cut through. The Blues down switch gives you that warm brown bluesound. This would be great for the folks who have single coil vs hum-buckers or just to get an extra bite, depending on the instrumentation in your band...I like both, depending on the song.. The switch acts very similar to a Dumble Mid Switch.

Here's what Thaddeus himself said

"After a lifetime of amps and pedals, I was in search of the ultimate do-it-all overdrive pedal. Of course I had been using Dumble-inspired amps for many years, but my love for the traditional sounds of the tube-screamer and even the sound of a cranked deluxe reverb fueled my desire to create a high-quality pedal that covered all the bases. I think of this pedal as an extension of my instrument rather than an effect. You can leave it on and turn the OD control all the way down to get what amounts to a clear boost, or you can dial in varying degrees of overdrive all the way to full sweet fat saturation! The overdrive and the volume control are interactive, very much like tube amplifiers with a gain and master control. The tone control actually works! I am very proud to have my name associated with such a high quality product created by my family at Freekish Blues. I hope you all enjoy many great times making music with this pedal!" - Thaddeus Hogarth 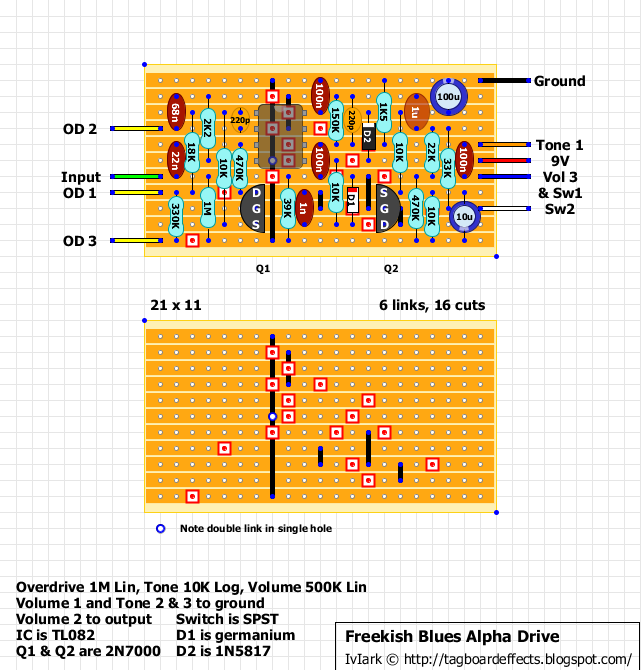