I put this on hold because the inductor used has a number of connections and although only 2 of them are being used it may make it difficult to mount on vero.  So I will put it on hold and maybe look at doing a daughterboard for the inductor, or maybe even using a different type like a Fasel which will be easier to mount on the vero board.  If anyone has any inductors they want to try then post info about them and I'll look at the best way to adapt what you have to this layout with possible just a couple of extra links required.

Update 2: I have changed the layout to incorporate a Fasel inductor for the time being, but will add mods for other inductors as required.

Thanks very much to CodeMonk for all the hard work he put into the degoop and trace.  I think most of you will know this story already.  Basically Vertex have been selling their Axis Wah for $349.99 and it turns out that it's a verbatim $149 BBE Ben Wah which has been gooped and relabelled despite Vertex claiming they were hand made in the USA with custom wound inductors.  They even sell a NOS version which is $50 more, and which has absolutely no NOS components in it, just the same BBE board with a different pot.

So basically it's the modern day Freekish Blues story with the other similarity being that Vertex are another TGP favourite and some people on there with absolutely no self respect will still argue Mason from Vertex's case and not hear a bad word said against him.  Amazing how fanboyism can turn some peoples' brains to mush to the point they refuse to acknowledge the damning evidence staring them in the face.

I love guitar effects, and companies like Vertex and Freekish Blues give the industry a bad name, making it difficult to trust new manufacturers and products on the market for fear that you're being ripped off.  Hopefully when Vertex endorsers like Landau realise what company they are associated with, Vertex will go the same way as Freekish Blue.  Just beware for Mason's next company popping up in a guitar shop near you!

For anyone who would like to see more info about it you can check out this web site where you can see some of the degoop pics along with a hilarious rebuttal from one of Mason's cranially challenged TGP admirers.  Worth a read:


In next weeks episode.  How Vertex's totally gutted and rebuilt (in USA allegedly) Boss volume pedal is in fact a Boss volume pedal with the tuner out components removed [shaking head facepalm smiley required].

Out of respect for the manufacturer who deserves the credit I'll include BBE's marketing first:
Ben Wah is based on a 1967 Class A circuit design that featured the unique Halo inductor. We re-engineered and custom-tuned the Halo inductor and potentiometer to re-create the expressive tones made famous by players like Eric Clapton, Jimi Hendrix and Stevie Ray Vaughn. All components are hand-wired for the ultimate in vintage authenticity

We didn't stop there. Ben Wah adds amazing versatility thanks to its “Harmony” control to help fine tune the Q/peak response. The verdict? Guitar Player Magazine had this to say in a wah roundup article:

...the BBE Wah has the sweetest, most musical voice of the bunch. Its potential to be a first-pick wah for any kind of music earns it an Editors' Pick Award. - Guitar Player Magazine"

and now Vertex's:
The Axis Wah is the finest representation of a 1960's style Wah with a few modern additions. It is designed to produce the most vocal characteristics reminiscent of the classic Wah tones we know and love, yet provide a smooth and rounded top-end that doesn't get too bright. Each unit includes our custom hand-wound HALO inductor, hand-made custom potentiometer, and hand-picked components to give this wah its distinctive voice. 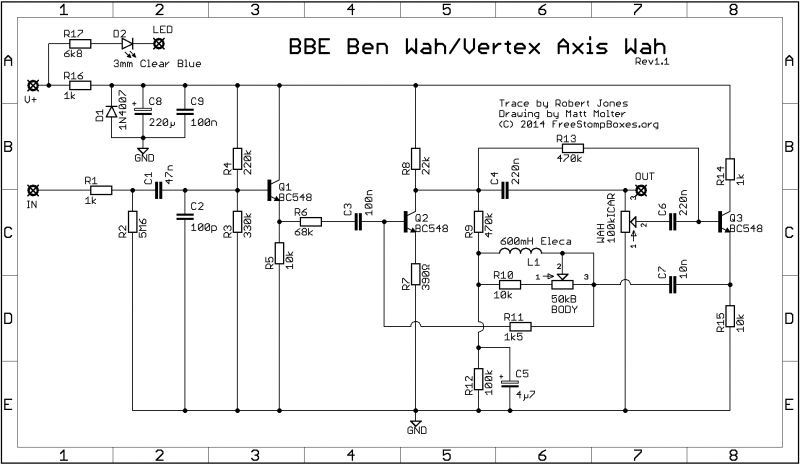 This layout uses a Fasel inductor instead of the Eleca used in the BBE simply because it is more suitable to mount on vero.  If you prefer to use the original Eleca then I will do a separate daughterboard that will take into account the pin arrangement in the Eleca 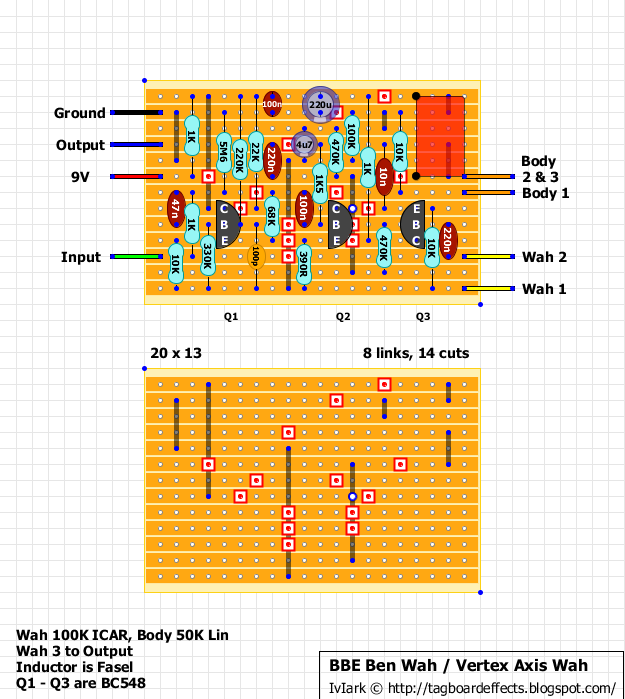