This is a really great sounding fuzz and definitely something different from the norm, so props to Resonant Electronic Design.  You'll notice on the layout there's a cap marked ??? and as you can probably guess the guy who did the trace didn't get the value of that one.  Looking at it though I suspect is may be a 2u2 poly cap because it is next to a 1u poly cap on the board but is physically larger.  I would definitely suggest socketing that one to test, but I think 2u2 is the value I'd try first.  The polarised 1u and 10u caps in this are tantalum and the 470u at the bottom left is rated at 6.3V which should allow you to keep the dimensions down for that one.  The 470u cap in the centre is the main supply filter cap and so will need to be rated sufficiently for the supply you intend to put in it, but if you're using 9V then a 10V cap should be fine as the series reverse polarity protection diode will be shaving around 0.7V off the voltage anyway.  Thanks to skywise for the pics and trace and mmolteratx for the scheme.

Info about the original:
Most guitar players either love or hate fuzz pedals. We found ourselves on the fence. We love the classic tones of Fuzz Faces, Tonebenders, Big Muffs, and other early fuzz designs, but many of them are prone to splatty, overly-compressed sounds when set to anything but the optimal settings. Modern fuzzes can do some amazing tricks and can produce some unique tones, but often they are one-trick-ponies relegated to the bridge of a song, random use during late-night jams.

We wanted to design a fuzz pedal that could do it all and never sound out-of-control or unusable. The task was to create a circuit that could produce vintage fuzz style tones, explosion-esque modern-fuzz-style tones, and everything in between - all without ever getting overly noisy or misbehaving. It took some serious tinkering and an entirely new approach to fuzz circuits, but we did it. This thing will roar, scream, and sing - all at the turn of a knob, and it will never let you down by being unpredictable or unusable.

Just like all of our Field Effects pedals, the Acceleron Fuzz uses a discrete Class A topology and is built with audiophile grade components. This is the fuzz that will replace a pedal board full of other fuzz pedals. 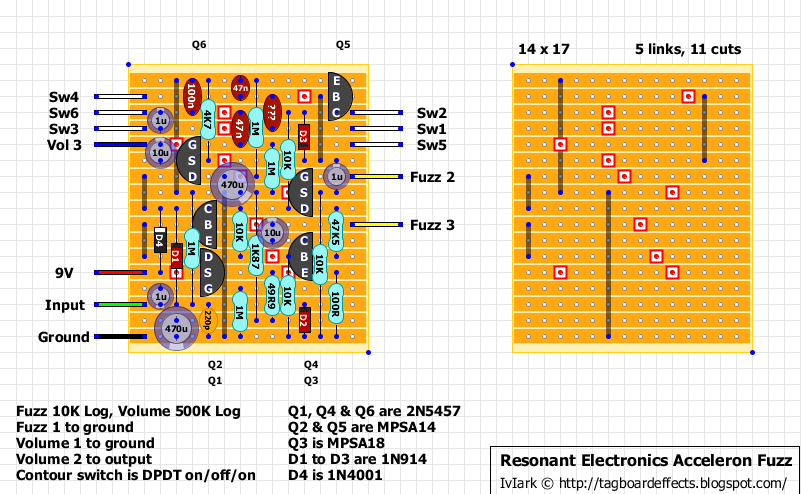