Requested by a few people.  This uses a vactrol but it might work with a roll your own LDR if you want to give it a try.  The spec of the VTL5C1 is 600 ohm on resistance and 50M ohm off resistance.

If you would prefer a tempo rate LED instead of a standard always on LED then take a feed from IC1 pin 7, and you will need to include a limiting resistor in series.  I didn't add this to the board because it would add an additional column which I didn't want to do if the feature wasn't required by most people.

A hybrid of vintage sound and state-of-the-art quality, the Demeter Tremulator is designed for years of trouble-free operation.

Designed to emulate the classic Fender tremolo effect (or vibrato as it is often referred to), the Tremulator features "lopsided" amplitude modulation with a rounded off traingular modulant waveform. Suffice it to say, the Tremulator sounds like the classic effect found on many vintage amps, but with less noise and hum and a greater range of speeds and depths.

Operation is fairly straightforward. There are two inputs on the front side of the unit: a 1/4" input jack on the right and a 1/4" output jack on the left with a battery-ground switch on the input jack.

There are two controls on the unit: Depth and Speed, plus a footswitch to bypass the effect, and an LED to indicate effect operation. On the side there is a trim pot to set the bias for the optical unit.

Depth affects the amount of amplitude modulation on the signal or the amount of effect. The tremulator design incorporates a small amount of gain (approx. 1dB) to allow for proper "tremulation." Also, by turning the Depth all the way off, the TRM-1 will function as a low noise volume boost. It's low-impedance output allows it to act as a line-drive, eliminating signal loss on long cable runs.

Speed increases and decreases the frequency of the low-frequency oscillator, enabling you to time the effect as desired.

Trim pot sets the bias of the optical tremolo unit. It effects the signal on and of time ratio. Turned up to height it will squeeze the signal, low it will loosen it. The unit comes preset to Ry Cooder's preferred setting.

Youtube demo showing good examples of the range of sounds from the pedal: 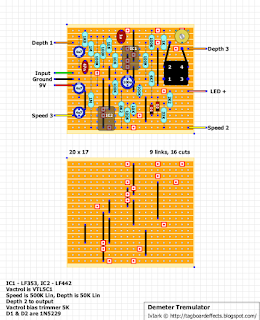