Update 10th September 2014: I had dropped this layout from the blog because there had been instances where people had been unable to get the IC, but more importantly I think there are other methods to do this now that are cheaper, much more compact and the kit comes with the required IC AND a PCB which I think is a glaring omission considering the price of the Taptation.  But I am leaving this here now so the information remains available for anyone wanting to build one.

For anyone starting a new project I would recommend looking at a product like the Tap Tempo kit from UK Electronic which is considerably cheaper, smaller and comes with all the parts you require in a single kit.

You will need to remove the Delay/Time pot from your effect, and the daughterboard then connects to pin 6 of the PT2399 to control the delay times.  Manual Time and Depth (modulation) controls are dealt with on the daughterboard and so switches are included for modulation, double time and delay scale, along with the tempo clock control (tap tempo using a momentary footswitch).

So get your Deep Blue Delay tapped up for ultimate TGP mojo points! :o)

Example of the tap tempo chip in action: 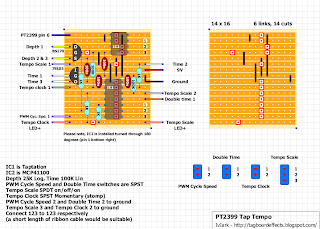