Zach's info about the original:


I designed this new distortion generator, Machine, with some different limitations. Like try playing chords through it. Hmmm. But put it in front of any string of fuzz pedals, and try to make it disappear. Machine is actually a dual frequency-tripler circuit that uses crossover distortion for the first time in any pedal, ever. It generates the distortion of the wave in the sloped part of the cycle, instead of the peaks and valleys like all other distorters and fuzzes. In other words, it distorts when your guitar string is in the middle of vibrating, while it's swinging, not as it's turning around. That's the same place where your speaker cone is sort of coasting, between all the way in and all the way out. Where nothing is happening, this pedal happens. With Machine you can leave your favorite distorting pedals on and still add a new element of energetic grind.

One thing to keep in mind, however, is that this pedal basically sounds horrible. It's primary purpose is to cut through. But like a wild man with a machete, it is not nice.

Knobs are In, which is drive; Limit, which clips the original waveform off at about the same size as the harmonics (if you want); and Out or Volume, which is output level. If the Limit knob is set to the right, the signal remains unclipped.
You'll notice the dynamic response is higher than most pedals. If you put a tremolo pedal set smooth in front of it you'll hear it sweep through it's wild frequency multiplying stages, or if the trem is set for square wave it will jump back and forth between crunchy harmonics. Conversely, you can get ringing harmonic effects using a dynamically freezing pedal in front of it like a compressor. The biggest drawback to this pedal is that of anything in your arsenal, it's the most likely to get you kicked out of the house by your mom, girlfriend, boyfriend, or wife. Or roommate or Dad. Or Grandma. Even your dog. Whine.     Keep in mind that this pedal needs to see a sloped wave in order to do it's thing, so an undistorted guitar signal going into it will allow it to generate the strongest harmonics. 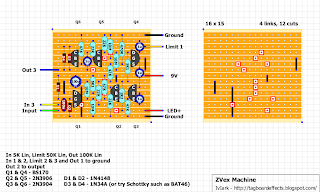