I thought I'd include the Bearfoot version of the Honey Bee, because I've heard quite a few people say they prefer it to the original.  Unfortunately you can't just change a few values using my BJF Honey Bee layout because there is an added resistor that needed cramming in.  Still you can just build both and the MP Sweet Honey as well and then you've got the set! :o)

Info from the maker:


The Honey Bee sounds and reacts like  small vintage combos with nicely worn tubes and speakers.

The Volume control controls the overall volume without changing the distortion.

The Drive control varies the distortion complexity and saturation.

The middle control adjusts the 'nature' of the EQ - begin with this control at  straight up 'noon'  ~  to the right there is a subtle adjust ment to the upper frequencies with the most treble at full clockwise.

... turning this control counterclockwise from noon  adds in lows and changes the distortion saturation interactively with the Drive knob ~ and at full counterclockwise the Honey Bee is fully bloated  and saturated like a small combo pushed to its limits.

Contrary to what you can see in the layout or what you may assume because of the BJF Honey Bee, the Bearfoot Honey uses red LEDs.  I'd strongly suggest socketing these LEDs though, the red ones will give more distortion and compression which will suit some people, but others may prefer the response given by the greens like in the original BJF pedal. 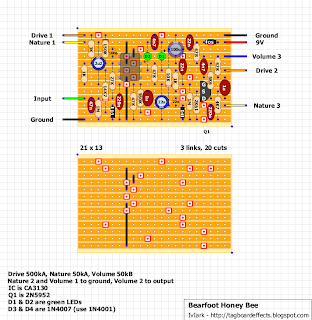