So any huw. The Grease Box. It is at heart, a MKIII/MKIV Tone Bender. Its bare bones and the circuit blue print are very Tone Bendery. The idea here was very simple indeed. What if Colorsound still made the Tone Bender MKIV in 1981. What would that sound like?

Okay so, gibberish aside. The Grease Box is a fuzz box that thinks it’s an overdrive. It has a lot of midrange cut and a good amount of clarity. It is responsive to pick attack so comes over as quite dynamic for a fuzz box. You’re not gonna get the transparency of a TS-808 or other such things; it is a fuzz box at heart. Remember that. It’s kinda like a Distortion + and extra gooey Tone Bender MKIV meeting somewhere in the middle. The ‘Level’ control has a linear taper so retains a good dose of the highs as it’s rolled off. The ‘Overdrive’ control will darken the tone somewhat as it’s rolled back. The nature of how both of these controls react will give you a lot more scope than you’d think from a two knob fuzz box. It’s Greasy, ay. 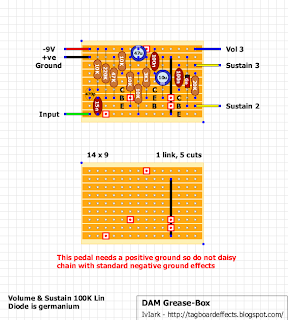 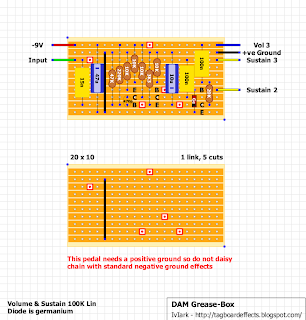