Here is an adaptation of the EA tremolo with the schematic done by runoffgroove.

Their notes on it:


Modifications to JD Sleep's version are:

* Input buffer and main gain stage have been combined into a single MOSFET stage designed by Gez Paton.
* The "pulsing LED" by Darren Inwood and Rob Strand.
* Depth and Speed controls have been adjusted to my preferences. The first 25% of the original 1M Depth pot rotation resulted in no audible tremolo effect to allow use as a pre-amp. The Depth pot has been decreased in value with carefully chosen resistor values added before and after. The Rate pot value has been increased and a reverse-log taper offers a better feel. However, a linear or audio taper pot can be used for the Rate control with no ill effects. The 2k2 resistor which precedes the Speed control has been reduced for a faster maximum oscillation rate.

"marrstians" reports that the pulsing LED can also serve as a status indicator when using a 3PDT bypass switch. Simply use the third pole of the switch to break the connection between the LED and the collector of Q3 when bypassed. 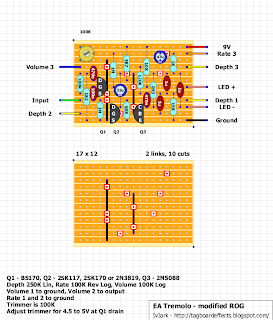