This one didn't quite turn out as intended but I thought I'd post it anyway as it may make a good experiment.  Whether you like the idea of removing buffers or not, I think most people would agree that the Lovepedal Eternity is still a great sounding pedal in its own right, and a much more simple build than the TS808.   So I wanted to give the DS1, which is hated by many, the Eternity treatment to see if it was more to people's liking.  I did this without thinking too much about it though and it was only when I finished that I noticed the buffer I removed was actually a gain stage! :o)

The first opamp channel is just a buffer as well, so that could always be turned into a boost with just a couple of extra resistors even if the results mean this is further removed from a DS1.  So all that considered I thought it may be something that the tweakers on here may have some fun with. 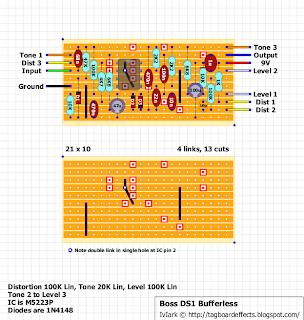