With 8 knobs and 3 switches I really didn't need to keep the size of this one down, but it will fit in a 1590B if anyone is utterly insane :o)  You can shave off another column if you solder D1 and D2 in the same hole and move the 1u cap over to the left into the hole vacated by one of the diodes.  But there probably isn't much point in saving the space when it's going in a 1590BB (at least) anyway.

Another mod would be to make the bottom left 100u cap switchable to change the speed range available from the LFO, but I'll leave experimenting with that one up to you.

The Magnus Modulus is another PT2399 based DIY echo modulation effect pedal. I wanted to make a digital delay and liked the idea of adding modulation ala Echo Base. I decided to use a stage from the BYOC Ping Pong with the LFO from the Tremulus Lune for maximum modulation control.  I didn't reinvent the wheel here, just a bunch of other ideas put together into one awesome effect.

The delay lengths are controlled via a voltage controlled oscillator in the PT2399 at pin 6. The nominal delay length is set by R9 and Delay Time pot. The modulation is coupled on top of this DC value via R10 and C13. There is no need for a variable resistor (transistor, LDR). While I had the LFO and buffers already on board I decided to add a tremolo coupled into the output amplifier stage with a J201 acting as a switch.

This project is intended as a DIY effect and hopefully an evolving one.  This is a highly modifiable circuit, hopefully you'll find the setup you like the most. The values in the schematic and layout are my personal favourites, your taste may differ so I'd suggest a few mods. The project fits in a 1590BB if you have skills

MODS: Delay filtering - I have a really hot bridge pickup in my Les Paul and it can make the delay section distort (I use both pickups and designed the pedal using the middle one, it sounds awesome) I increased the values of C11 and C18 to filter more of the highs. Capacitors you can play around with to change the filtering are: C5, C6, C11, C18.

The tremolo could be inlplemented with an LDR, I used the J201 as it is pretty common. There is a bit of charge injection that is only really noticeable with the space (or smooth, can' t remember) knob is turned down, the tremolo sounds really good and smooth when that control is set properly though.

You can use less knobs, the gain knob could be a trimmer if you don't want a booster.  Taking out the limiting diodes will increase the output significantly during self-oscillation and is not recommended 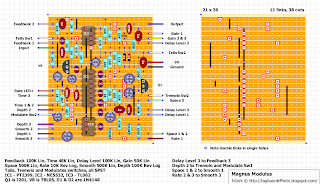