A few requests for this so I thought I'd better get it sorted.  Info from Wampler about the original:


Over the years, we've had tons and tons of folks asking us when we were going to produce an overdrive pedal that emulates the sound of a cranked Fender® amp.

When Brian decided that he was going to see if he could do it, he wanted to ensure that it was perfect. Looking back at it now, we think he must have spent a good 9 months breadboarding and prototyping lots of different ideas, a/b-ing each one with various Fender® amps, tweaking and changing until he found the sound that was accurate.

Once he got a sound that he was 100% happy with, he took it to Nashville studio ace Brent Mason to test it out. To be certain, Brian also took several pedals by other companies that are supposed to do the same thing. Brent knows Fender® amps better than anyone, and Brian knew if Brent thought it was good, we were onto a winner. Long story short, Brent LOVED it!

We've heard guys say they hear The Twin®, some say Vibrolux®, some say Deluxe Reverb® when they play this pedal. Whatever they hear, it still has that "Blackface" type of sound that we were looking for. When you turn it up, it's going to break up more like the amp would if you turn it up.

With the additional of the boost switch, you can increase the gain to make it sound like the amp is being driven harder. 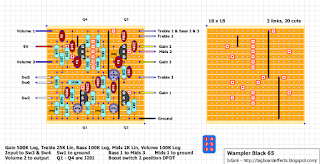