Info from David Main about his original:


We begin with a re-cap. The FR-69, our take on the early bird Mosrite Fuzzrite. The germanium powered glass shattering freak show. As stated on the page for said pedal my only real interest there was because of the awesomeness of Ron Asheton and the Stooges. In other words, there is no real nerd obsession with the pedal itself. Thanks to a trip to London a visit to a Soho's Original Bookshop and the discovery of Robert Matheu's outstanding book on the Stooges I think it maybe wise to dispel the "Ron used a Fuzzrite" myth once and for all, that is until someone shows me a picture of Ron actually using one.
Robert's fine book has several fine shots that clearly show Ron actually using a Vox Tone Bender. Other photographic material that can be sourced on the internets show Ron with what appears to be a Marshall Supa Fuzz. Either way, it ain't no Fuzzrite. In a nutshell and in my head at least. Dig the early Stooges fuzz tone? Get high, get a Vox. Simple.

So what has this gotta do with the FR-70? Not a damn thing. Just explaining what we ain't doing here. So this new Fuzzrong is...? Outta the whole Ed Sanner family of pedals and the different versions produced the one I always had a genuine soft spot for were those made with the freaky little orange encapsulated Sprague circuits. Louder, chewier and with mightier balls. I've always been fond of the general sickly thickness and the almost psychedelic nature they seem to have. This is basically our salute to the those funky little orange packages of filthy fun.

Like with all good workings it began with a sacrifice. An offering to the Fuzz God. The pre-selected healthy young virgin was carefully dissected to reveal the inner workings and the bounteous gifts of the unknown. With much suffering and toil the knowledge of the highest degree was gained. Our dissected orange goddess became the starting block for what you see here. The FR-70 is not a direct clone but and very gentle tuck and re-shape. It's difficult to generalize too much as the Sprague modules were not or at least don't appear to be 100% identical tonally when in use. Like with any discrete fuzz circuit you will always have some play or movement in the delivered fuzz tone. The sacrificial lamb was an example I found particularly pleasing. The gentle refinements then move it into a somewhat more balanced state that aid reproduction for a more modern parts selection.
Constructed like her greasy twin sister the FR-70 uses the same methods of assembly and the same principles of design as the GB-83. Specially selected silicon devices are the foundation to the whole circuit. Very precise gain levels had to be matched and then reproduction to achieve the desired balance in tone. The same detail is then applied to the whole pedal. Basically every component and part is selected for overall sound quality and performance.

So the tones from within the tin. The first thing to note compared to the FR-69 is that the overall operation is more stable. The gain spread on the Depth control is much more even with a greater extension of the mid and low frequencies. The general position that the FR-70 takes is an offering of tones that are situated in the low mids with a punched out boost over into the highs. It's not quite scooped as such but a subtle high and low kick is dB boost is apparent. The gain and sustain levels are also more stable and maybe more user friendly. For example, the FR-70 is not a screamer from the get-go. Again something shared with the GB-83 is that you have to put the work in and use the right gear to get to your destination. The FR-70 does have the where with all to get fatty and rancid with some pleasing fuzzed-out compression but the subtleties are also an important factor in my head so the ability to draw pretty flowers with trails of magic dust is there for the taking too. I guess like the GB-83 it is somewhat tool like. It is a fuzz generator but you have to give it the instructions. Not quite a blank canvas as such but fully able to work with and around you. It's sick & rong but only as much as you are, my dears. 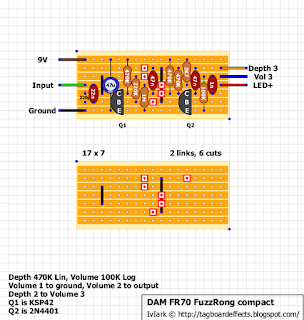 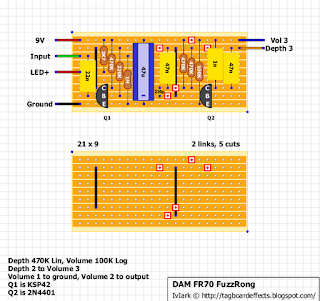