This is an awkward one to do a layout for because there seems to be so many schematics out there that the best one is always going to be a matter of personal preference.  The original used one half of the opamp for the effect, and the other half for the bypass buffer, with a transistor buffer at the beginning and end of the circuit.  This layout is based on the GGG schematic which has an input buffer only and because the layout is designed for use with a 3PDT true bypass switch it ignores the bypass buffering and so only uses one half of the opamp. 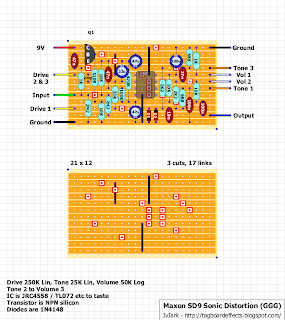 Here is the version with transistor input and output buffers: 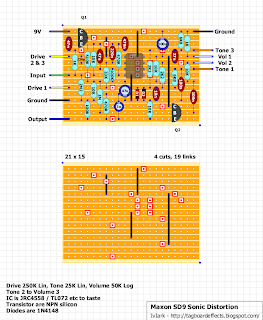 Both should fit comfortably in a 1590B.

Many people have reported good results without the output buffer, and so it may be worth trying the most simple option first to see if you're happy with it.

Possible mods that have been suggested, if you find the effect muddy then consider swapping the 22u and 47u caps for 220n and 470n respectively (some people believe the 47u is definitely wrong and was actually .47u and just misread).  It may be worth socketing those caps so you can experiment.  Some people have reported that the 220p cap should in fact be 1n, but others have said it sounds better with that cap omitted entirely, so again it may be worth socketing so you can swap and remove to test.  Suggested improvements to the tone control is to swap the 27n cap for 33n, and swap the 100n cap connected to Tone 1 to 47n.  Socket and see.

Happy experimenting.
Posted by IvIark at 14:47