Thanks to Ice-9 on FSB for the schematic.  Unfortunately the value of the dual linear Gain pot wasn't noted although he suggested it was a low value such as 10K or 25K.  That would seem fine for the Gain B connections but seems low for gain control in the feedback loop which is the Gain A connections.  It does seem to be a low gain overdrive which does reinforce the low value pot suggestion, but rather than experimenting with values of pots you're unlikely to have in stock I think it would make this pedal more versatile to have two separate Gain pots.  If you use a 1M for the Gain A connections and a 10K for Gain B that will allow you to control feedback loop clipping and hard clipping independently rather than increasing or decreasing both simultaneously.   It will also allow you to go much higher gain with the feedback loop pot if you choose to, which may appeal to some people (you could of course reduce that pot value to adapt the feedback loop gain to your own preference).

Remember that the value of the Gain A pot will be effectively reduced by the 1M resistor in parallel with it in the feedback loop, so if you use a 1M pot the maximum resistance will only be 500K.  If anyone does experiment with dual pots then please comment on how it sounded and the value used.

If you're into blues or classic rock tones then this pedal is the one for you ...

Designed as the perfect companion to your valve amp, it's main goal is to push your amp into submission and give you those full rich tones without sacrificing the control at your fingertips.

This pedal is definitely not a one trick pony ! The Custom Drive can perform buffering, treble boosts and creamy sustaining leads with all the variations of good old rock and roll chord grit and crunch in between.

You will not find any DSP modeling inside this pedal, only the purest of analog circuits.

The pedal was designed in such a way that it allows the character of you amp / pickup combination to shine through and retain the response of the picking and volume settings on your guitar. Great for comping styles, delicate pickers, slide players etc ... keep in mind that amps with transistor preamp stages generally don't respond well to being pushed by overdrive pedals as it tends to unleash their harsh character ... by all means give it a try, there are some excellent transistor amps out there, but remember that this pedal was not designed for this purpose. It really shines when paired up with a valve amp !

The Custom Drive features a dynamic gain / tone network ... unlike most other pedals on the market today, this pedal does it's filtering inside the gain stage which results in a more open and transparent sound as it mainly affects the clipping and not the essence of your tone. Depending on the settings of the tone control, the gain control will have a different response curve. Although this creates an extended range of settings, we haven't lost sight of the fact that things need to be musical and intuitive to the performing musician. You'll be up and running with this one in no time at all !

The Custom Drive is true bypass wired and 'pop' reduced as you would expect from a quality pedal and will run quite happily on voltages from 9 all the way up to 18 volts DC. Running the pedal at higher voltage results in more headroom and a slightly cleaner and more defined tone... experiment and decide what works best for your individual playing style ! 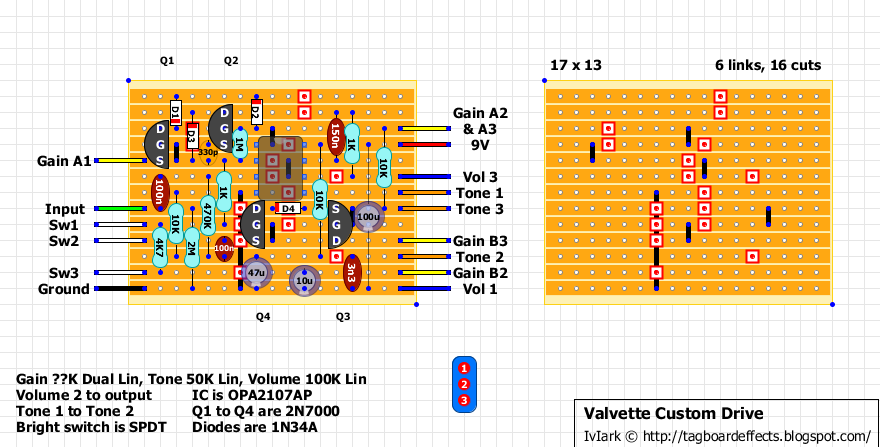