You don't come across this very often, but this is a fairly original compressor!  At 22 columns wide it will fit in a 1590B, but file the sides down as much as possible for extra space, and maybe use some electricians tape on either side of the box for insulation as a precaution.  I tried to get it down a bit more but that's the price I pay for wanting flat resistors.  Oh and watch for the shared hole at pin 8 of the IC.


The Love Squeeze is a compressor designed simply to sound right with guitars, without any bizarre “pumping” effects and without any noise.
This has been achieved by designing a circuit from scratch instead of adopting the more common approach of using an operational transconductance amplifier (for tech heads, it’s usually the CA3080 chip) or simply copying an existing design (like some American boutique makers have done) and gives the Love Squeeze a sound of its own. Low level signals can be raised by as much as 20dB without boosting high level signals, so when used in front of distortion - either in a pedal or an amp - leads lines can be fattened up without chords sending the distortion into mush. When used with a clean sound the Love Squeeze can be set to just take off the ice-pick attack of single coil pickups for a tone a little easier on the ear. Like reverb (when used sensibly), this is a subtle effect which can go almost unnoticed until it is switched off - then you wonder how you could live without it. 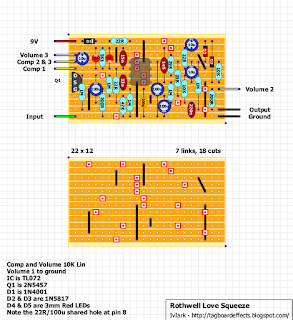