Direct from the captain:


The origin of the idea was to be able to make some Ram Head's at some point with and greater ease. I don't really care to do that to be quite frank, old shit is old, so I have opted for this route. The XB-70 is a Big Muff, but to be precise, a clone of my Guild Foxy Lady...that I think is from around 1977!?!? I can't quite recall to be honest. The year ain't important, though the fact it sounds like torn leather soaked in piss and salt smushed lovingly into ears does. It is a brute of a pedal, has a really intense roar at full tilt, like any good Big Muff really. Though my Guild has the extra added bonus of insanely loud background noise and batshit crazy amounts of feedback ladened sustain. So the XB-70 takes this particular Guild box as a reference point though assembled so it's a little more polite but still packing mucho fire in tah belly. As much fun as it would have been to clone that throwing shit at the walls amount craziness into these for the most part the old Guild sounds that way because one of the transistors is fucked. In other words, most sane folk would consider a pedal that they had purchased that sounded this way to be very defective.

So to summarize. The X8-70 is a Guild Foxey Lady replica, from around the time EH were knocking out the Ram Head Muffs, that has a bad attitude but will play nice and not hurt your feelings. 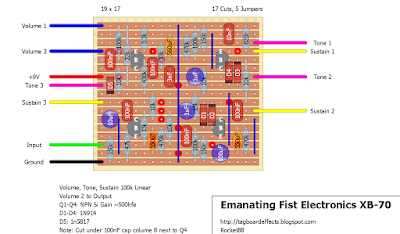 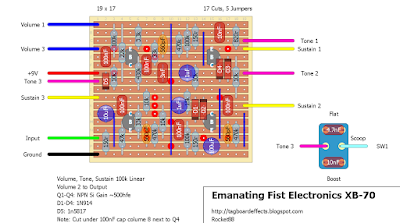