Another day another fuzz. While we have a lot of fuzzface layouts on the site, you can never have too many fuzzface. There seems to be a bunch of different versions, at least a lot of different colors of them. I don't remember where I found this schematic, but it's a pretty good sounding fuzzface, IMHO, that's supposed to sound like SRV's tone.

A description of one of the sellers of the pedal:

The Texas Square face was originally designed as a replacement for Stevie Ray Vaughn's fuzz faces, which were always dying. Cesar built his circuit into one of SRVs dead fuzz face boxes and Stevie used it until his unfortunate death.

The square face is NPN not PNP..it comes with two germaniums but it has transistor sockets and two silicons are included for more gain. They can also be combined, for different tones. Changing positions will also help!! You can really hear it on the SRV album "IN STEP" 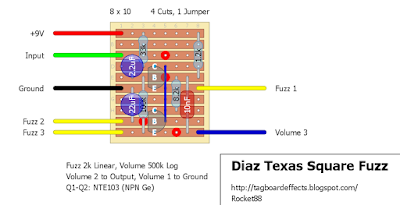