For those not familiar with this circuit type it has a very similar tonal qualities to the old Meathead Dark though I'd say a more refined approach with a more traditional overall tone than that of any Meathead. The mids are quite flat the lows considerably boosted and the highs pretty natural and open sounding. Heaviness, it is some.

There were 2 versions, a big box version (older) and smaller (newer). 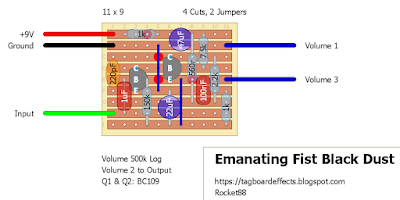