So I randomly stumbled across the schematic for this one over at FSB and as always thought it would be a nice addition. Just like any other Way Huge pedal I think it sounds badass.

The mighty Angry Troll Linear Boost Amplifier from Way Huge Electronics serves up generous portions of volume and gain to pummel the input of your amp with up to +50dB of gain. It adds bite and punch while transforming your mild mannered tone into a beastly sonic onslaught! The Angry Troll's two controls interact like a vintage mic pre amp. The Anger knob-a rotary switch with six Fists of Fury positions-adjusts the amount of gain created by the Troll's op-amp, while the Volume knob regulates the overall output level. High grade components are used for a precisely tuned circuit that works like an extension of your amp. Another tone monster from the mind of Mr. Huge! 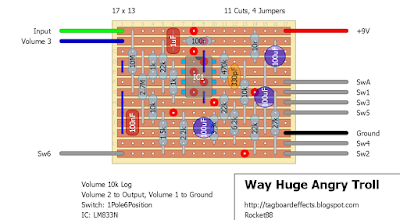 Layout 2: Was kinda requested below. Modded to remove the fist switch, which controls the gain, and replace it with a pot. Quick note about this is that the way the switch is wired when it's at position 1 it has the most resistance allowing a clean tone. according to my calculations at Sw1 there should be 62.5k resistance, and since there's no 62.5k pot you could use a 100k or 50k pot. Nice thing about doing this is the board shrunk, all pot wires are connected to the board, will give more options for grit, and it should be a stupid simple build. 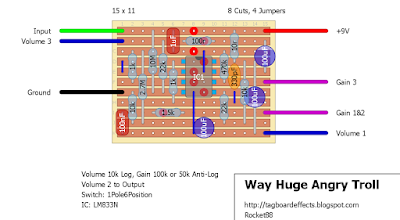