Not a lot of info on this one, so here is what I found out about it:

Uber Rare Way Huge Purple Platypus Octidrive only about 120 or so made. Essentially, this is a Red Llama Overdrive and an octave effect similar to the Green Ringer.  A very specialized pedal,  its best use is to push your already driven amp into fuzz while doubling up on the upper octave. Discontinued way back in the late 90's, and no reissue set for release.

I will add one more thing. On the schematic from over at FSB there's a 27k resistor that seems to go nowhere coming off Drive 1. I've looked over the PCB a million times, and despite the thought it has to go somewhere I'm certain it's a dead end. Maybe to make a possible tracing more difficult. 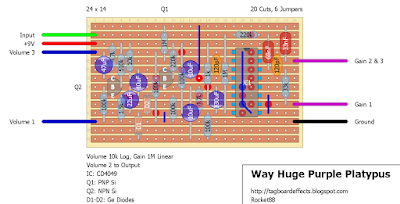