Couldn't really find a good description of this pedal other then it's a Fuzz-Wah produced in the 70's by Jen. Here's my take based on the schematic. Just like many of the other fuzz wahs I've seen and working on layouts for this is essentially a classic inductor wah with a fuzzface type fuzz. There's a few differences I've noticed compared to a lot of the others. First, there is no control over the amount of output of the fuzz, ie it's set. Second, unlike a lot of the others this one has the fuzz in front of the wah, instead of behind the wah. From the video I found of it, I'm defiantly digging the fuzz and think the component changes gives it a little something different that would be nice as a stand alone fuzz, and the wah has a nice sweep to it as well. 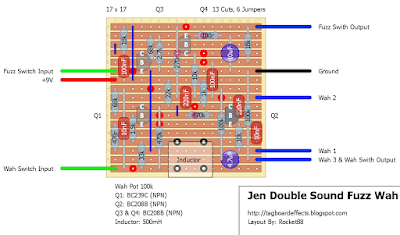 Quick Note: The fuzz should be wired in front of the wah.
Posted by Zach at 19:07