The Colorsound Fuzz-Wah, or to be exact the Colorsound Wow-Fuzz! A new version of a funk-tastic old timer. The original 1970’s two transistor silicon distortion stage delivers the fuzz and the classic inductor based Colorsound wah circuit gives you the wow! Ah, the inductor based circuit you say. Been awhile since Colorsound did that, right? That’s right and who better to achieve time machine like accuracy on such a wah circuit than monsieur Castledine of Castledine Electronics fame. From the reproduction circuit board to the custom wound vintage specification inductor, this is a genuine and bona fide Colorsound wah in everyway. The huge soaring sweep, highs that level mountain tops and low mids that sink ships. Fast reacting prono soundtrack like cool, nothing chukka-wah’s like a Colorsound. Buddying up along side this specially falvoured wah circuit we have the authentic fuzz stage as featured in all the early Colorsound Fuzz-Wah’s. Voltage feedback family ahoy. This transistorized silicon fuzz circuit is biased for a smooth and mellow fuzz tone. Rich with heavy density that gels perfectly into the wah stage once engaged.

Independently switchable stages. In other words one switch to engage each circuit. It may seem a little odd at first having both mounted at the front of pedal but it does work surprisingly well indeed. After a little bonding session with the pedal it becomes quite easy to select the circuit you desire or even engage/disengage both simultaneously. It is most certainly not rocket science but a little introductory time is never a bad thing. 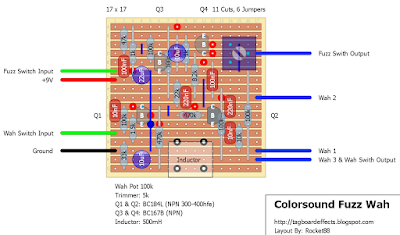 You want to use DPDT switches to turn each effect on and off, unless you're going to put LEDs in to see what's on and off, and the wah comes first in the circuit.

A quick note: The original transistors have a pinout of BCE top to bottom on the flat side, but since they can be rather pricey these days I decided to make the layout using the more common CBE pinout. So if you decide to hunt down the original transistors be aware that you will need to twist 2 of the pins. Not a big deal, but can be kind of annoying for those of us that are a little on the meticulous side.

Also, the description I posted is for the Sola Sound reproduction made by the captain. He switched the 5k trimmer to a 47k, so you can put a 50k no problem.
Posted by Zach at 04:24