The Hizumitas was designed for the one and only guitar sorceress, Wata, from the legendary band, Boris! We could not be more excited to have the honor of working with such an iconic legend known for her crushing riffs and mind-melting leads. The Hizumitas is a faithful sonic recreation of her go-to distortion which has been a staple of her tone for many years: the Elk BM Sustainar.

Despite the claims it's not a 1:1 clone of the original, as there are some changes, but who doesn't love a BMP variant. The only change from the schematic is I included a polarity protection diode and 100uF filtering cap in place of a 100r resistor from +9V to the power rail. If you want to include it swap out D3 for a standing 100r resistor. Build on fellow followers of the fuzz. 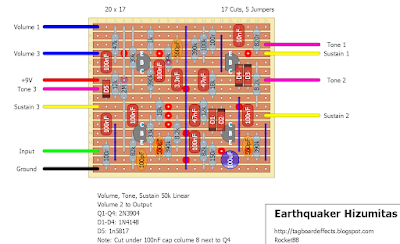 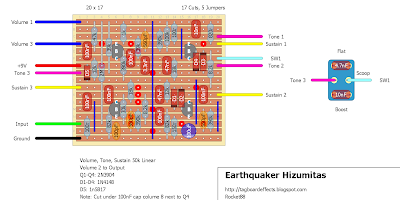