The Bad Monkey is a very popular low cost pedal which most people have assumed to be a simple Tubescreamer clone but is a little bit more than just a verbatim TS808.  It actually bears a lot more resemblance to the DOD Juice Box which is handy because the person who did the trace couldn't get a couple of the cap values and so they have been inferred from the Juice Box schematic.

The layout is simplified from the schematic, and all the FET buffered switching has been removed so it has been put together with true bypass switching in mind, and the input and output buffers have also been removed, so this can be thought of as a Bad Monkey Eternity if you like! :o)

The cap values that were unknown were the 51p and the 220p. The 51p will be fine and is a commonly used value for this kind of filter (increase if you want to soften the distortion more), but you may want to experiment with the 220p and so I'd suggest socketing that one and seeing what you come up with.

If you want a bit more gain from it, try increasing the 100K Gain pot.

Info from Digitech about the original:

The Bad Monkey Tube Overdrive gives your amp a boost just when you need it. It has been compared to the TS-808 but with having the unique ability to smooth out the distortion by use of the low and high EQ controls. Most overdrive pedals give you one tone control knob thus limiting your tonal options. You asked for a pedal that will maintain your guitar's distinct tone and DigiTech delivered! With its rugged design, separate mixer and amp outputs, and amazing tonal options, this pedal truly is a Bad Monkey. From Blues to Rock to everything in between, it will give you that amazing overdriven tube amp sound that will keep begging you to crank it up! 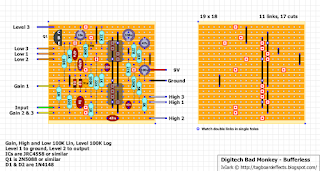